Following teams’ desire to rotate Championship locations each year, all age divisions will rotate east for the 2022 AFCS. The Alliance Fastpitch has made a few adjustments to the event format, event dates and event locations after gathering feedback from our members. The AFCS will continue to utilize the expertise and infrastructure of our event partners – Triple Crown Sports (TCS), USA Softball, and USSSA — to operate each AFCS.

The AFCS prepares our athletes for the next level with the AFCS Championship format. The Alliance adjusted our AFCS format to enhance all team’s playing experience while keeping our Regional/Super Regional/Elite 8/Championship Series format intact.

The new format for the AFCS allows teams from every League the opportunity to earn a berth to the AFCS. A total of 96 berths can be awarded for each age group with all 96 teams starting in 16 Regional brackets. Following a double elimination Regional, teams will then be seeded into a Tier I, Tier II, or Tier III Super Regional. The top 8 teams in each Tier will advance to that Tier’s Elite 8 with the final two teams playing in a best-of-three National Championship Series. At the end of every AFCS, we will name a Tier I, Tier II and Tier III National Champion for every age division. (*Note: If we have less than 96 teams, then the event can adjust to Tier I and Tier II only) 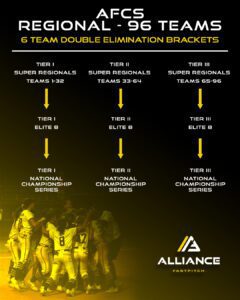 Qualifying for the AFCS:

80 of the 96 AFCS berths in each age division (10U to 18U) have been allocated to each Member League based on registrations and past year performance. Additionally, 8 berths in 14U/16U/18U will be awarded to the 8 Super Cup Pool Winners from Stage 1. The remaining 8 berths will be allocated by the Alliance Fastpitch through regional events.

*Teams will not have to qualify for Tier I or Tier II through League Play in the 2022 Season. All teams will be competing to earn a berth to the AFCS. Teams will move to a Tier I, Tier II or Tier III Super Regional based on their finish in the AFCS Regional Bracket. Top 2 finishing teams move to Tier I, next 2 finishers move to Tier II, and the bottom 2 finishers move to the Tier III Super Regional.

The Alliance Seeding and Oversight Committee will seed teams at the end of the year based on an established set of criteria. The purpose of the Seeding Committee is to seed the top 32 teams and place them into our Regional Brackets. The Oversight Committee, led by Derek Allister and OnDeck Softball, reviews the Seeding Committee’s work to recognize problematic match-up issues and to instill confidence into the Seeding Process. Final seedings will announced after all teams have qualified for the AFCS.

The 2022 10U and 12U AFCS will be hosted by USA Softball in Oklahoma City, the Softball Capital of the World ®. Our 10U and 12U teams will have the opportunity to compete for a National Championship on the same field as the Women’s College World Series! The event will begin Monday, July 25th with team check-in and AFCS Players Experience and will end with Championship Games on Sunday, July 31st. Games will be played at Hall of Fame Complex and surrounding complexes in the Oklahoma City area.

The 2022 14U AFCS will be hosted by Triple Crown Sports in Southern California. The event kicks off on Sunday, July 31st with our AFCS Players Experience and ends August 7th with Championship Games.  Games will be played throughout Southern California including Big League Dreams and Lake Elsinore, CA.

The 2022 16U and 18U AFCS will be hosted by USSSA and held at Grand Park Campus in Westfield Indiana and Champions Park in Kokomo, IN. We are excited to introduce our teams to the 400 acre facility at Grand Park with 26 turf fields in one location and access to over 40 turf fields in a 30 mile radius.  The event starts with the AFCS Players Experience on Sunday, July 24th and ends with the National Championship on Sunday, July 31st. This event will also feature the 2022 Alliance All Star Game Powered by Under Armour.

Continue to follow the Alliance Fastpitch on social media and our AFCS event page for more information on Qualified Teams, Event Updates, and more exciting news around each AFCS.