Starting on Friday and wrapping up Sunday, the first-ever Alliance Fastpitch Fall Cup took place with elite teams from all over the country participating. 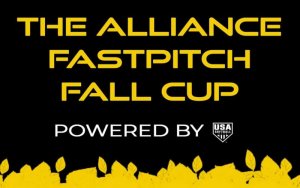 The Fall Cup was hosted and run by USA Softball at the USA Hall of Fame Complex and Wild Horse facility in Mustang, Oklahoma.

“The vision for the Alliance Fastpitch Fall Cup was to create a ‘Ryder Cup’ style event in youth fastpitch where we brought together the top teams from each League and they competed against each other as a League Team,” explained Jami Lobpries, the Executive Director of The Alliance Fastpitch.

For more information on The Alliance Fastpitch, including each of the Leagues, click HERE

“The first year was challenging with teams having played a limited summer schedule in certain areas and with current travel restrictions still in place for other regions,” she continued. “Additionally, several states are currently in their high school season which limited other Leagues, especially for a first-year event.

Two Lone Star State teams from the Texas FastPitch League, the Texas Glory and Texas Bombers, finished 1-2 at the 18U level while Iowa Premier finished on top at 16U ahead of two California teams.

Here is the standings recap from the Alliance Fastpitch Fall Cup, Powered by USA Softball:

Lobries explained that there were two goals that were successfully accomplished over the weekend.

“Our goal in year one was to utilize this event to show our message of ‘competition on the field and unity off the field,” Lobpries added. “As we created the leagues and The Alliance Fastpitch, we’ve been working virtually. This event provided a unique opportunity to bring together some of the top teams from each League while also utilizing the time off the field to spread our message of unity.”

The “competition on the field” was outstanding with many of the top Extra Elite Eighty 18U and 16U teams going head-to-head and off the field there was value as well.

“One of the core values of The Alliance Fastpitch is connection,” Lobpries, who played at Texas A&M, stated, “which includes connecting our generations of athletes.

On Saturday, the club players, their families and coaches also heard from two greats of the game, Cat Osterman and Shelby Pendley, who just completed their first season with Athletes Unlimited. The two pro and international stars took part in a discussion for the teams and stayed around to answer questions from athletes, coaches and parents.

As for the play between the lines, it was exactly what the leaders of The Alliance Fastpitch were looking including the support of non-playing teams sticking around to watch.

“The energy at the complexes was electric with great play on the field including walk-off wins, SportsCenter Top 10 plays, and pure competition,” concluded Lobpries. “Even more important, the energy off the field was welcoming and inclusive. Teams stayed at the ballpark to cheer on their organizations or other teams in their league, and just to watch the great competition.”

And there some spot-on coach impersonations, too, as Brook Blankenship nailed her Wichita Mustangs head coach Mark Griggs:

Announcements on next year’s event will be out soon including dates, location, and how to qualify for the 2021 Alliance Fastpitch Fall Cup.