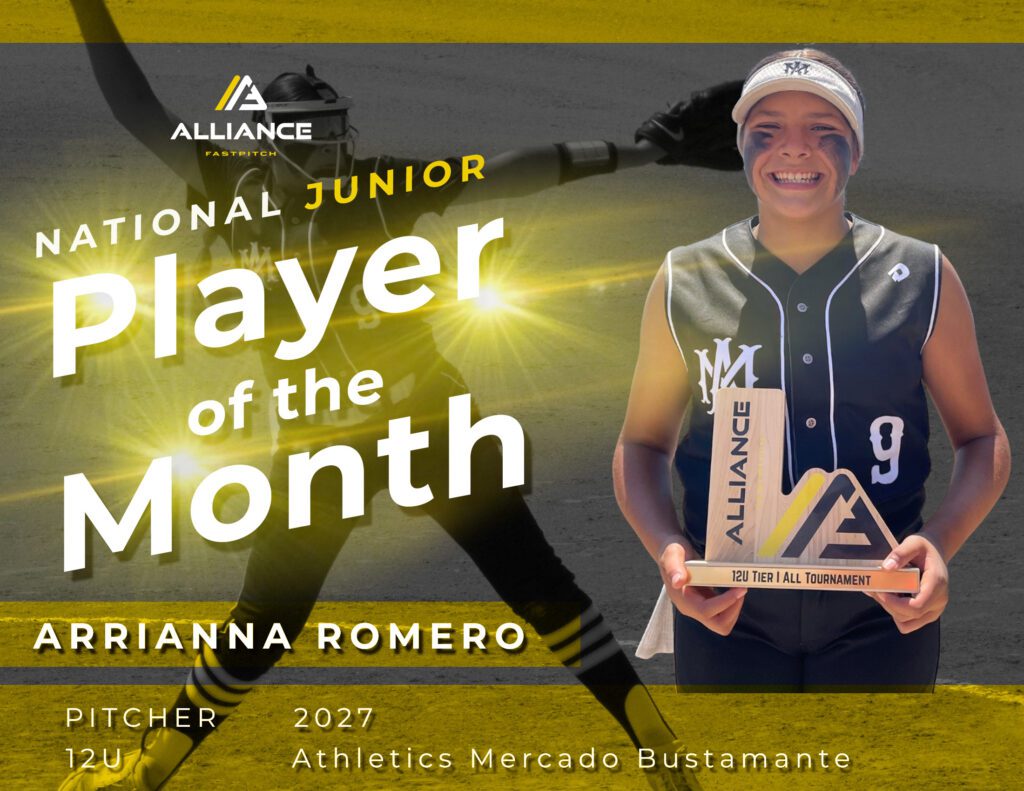 As part of the Alliance Fastpitch Player Recognition Program, we are excited to honor Pacific Coast Fastpitch League (PCFL) pitcher Arrianna Romero of Athletics Mercado Bustamante as the Co-Junior National Player of the Month for her performance in February.

Stats:
During play in February, Romero was lights out in the circle. The 12U pitcher recorded a record of 10-0 during 49.1 innings pitcher. Romero only allowed 19 hits, 4 walks and a whopping 76 strikeouts, posting a 0.85 ERA.

Softball Story (How did you get started?) – Tell us about you:
“I started playing softball at 6 years old, it wasn’t until the summer of 2016 when I saw another little girl pitch,” Romero said. “It was then that I told my parents I wanted to become a pitcher too.  I would practice with my dad all the time at the park and it paid off. That next year in 2017 I made the Silver All-star team, since then I haven’t stopped pitching or practicing. I think that having coaches that helped guide me and show me things along the way helped a lot too. Rec ball is where I learned a lot about myself and the sacrifice it takes to become a good player, It is also where I gained confidence in myself.”

Favorite Softball memory:
“I would say I have so many great softball memories over the years but the one that stands out to me the most is when I found out I was ranked the #1 player in the nation for the class of 2027. I was sitting at home with my family and we were reading down the list and I was hoping my name would appear somewhere on there. As it got closer and closer to the bottom my heart was pounding, those last three really got me when I didn’t see my name there my heart dropped and then we saw it! We all screamed, cheered and cried. I couldn’t believe that I made it and was ranked #1. This has to be the best feeling that I have ever had so far. A close second would have to be last year when I helped lead my team to 5th place at the AFCS as a first-year 12u team.”

Coaches feedback:
“Arrianna “Arri” consistently shows up every weekend ready to compete,” said coach Daniel Bustamante. “She’s such a competitor, that at times, it’s difficult to give her a games rest. Not only is she the bulldog of our pitching staff, she also hits in the middle of our lineup. Recently, she was ranked #1 in the nation for the 2027 graduating class by Extra Innings. She’s well known here in So Cal and just recently is getting known across the Country. As her coach, I am excited to see how she further develops and becomes an even better player and teammate. We’re lucky to have her as part of this amazing team. Congrats Arri! The sky is the limit kiddo!”