Giving back on and off the field- Virginia Glory 16U 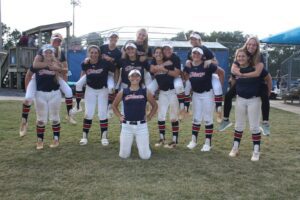 Fairfax Station, Virginia, is the headquarters for the Virginia Glory and are led by head coach, Suzy Willemssen and are part of the HFL. Coach Willemssen has been coaching fastpitch softball for 20 years, and throughout the years she has taught her players many valuable lessons.

“If you talk to our players and families, you will most likely hear a common theme of our Glory culture; fostering warrior spirits, relentless competitors with servant’s hearts,” says Coach Willemssen. While talking to the players, the theme Coach described was most definitely present.

“What sets our team apart is the culture we’ve created. We all trust and push each other in ways that I’ve never experienced before, and it’s something I find really special,” says Megan Davies, a second baseman and outfielder for the Glory. “This team is like a second family, and we all have the same mindset.”

Caitlyn Cornwell, an outfielder, says that what really sets this team apart is their love for one another, and their love for the game: “we gel so well as a group, which really translates onto the field…”

The bond VA Glory has, has led them to do some great accomplishments on and off the field. As an organization, they annually hold a charity tournament for Children’s National Hospital in DC where all the net proceeds go to the kids of the hospital. They have raised over $200,000 since the tournament started just 6 years ago. On the dirt, they’ve had numerous Gatorade Players of the Year, National Champions, members of the Junior Olympic team, and some seriously high rankings. They accomplished all of this by creating a “WE over ME environment,” says Coach Willemssen.

It’s something they drill into their players’ minds, including the younger ones. “It’s not about me, it’s about something bigger than me,” says Kaylee Avvisato, a freshman pitcher and shortstop. “I have never played on a team that is as unselfish and works as hard as this team.”

This notion of selflessness was also heavily acknowledged by outfielder and first baseman, Natalie Elias; “playing for Glory means that you will be the best you can be on and off the field, you will be selfless for your teammates, and you’ll commit to improving yourself and your teammates everyday.”

Just this past weekend, the VA Glory 18U Willemssen/Myers traveled to Myrtle Beach for the HFL Mid Atlantic Qualifier where they secured a Tier II berth to the Alliance Fastpitch Championship Series (AFCS). Keep an eye out for them, as they will be making a splash this season. The VA Glory is an organization that truly plays for the name on the front of their shirts, not the ones on the back.