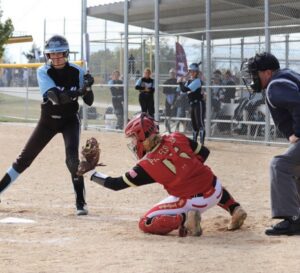 Stats are in for March, and it’s time to recognize your Heartland Fastpitch League (HFL) player of the month and…we have two! Congratulations to 2023 graduate, Logan Pickelsimer , and 2027 graduate, Addison Dodson!

Pickelsimer, of the 18U Epic Premier Sydney, is from Mustang, Oklahoma and makes her presence known! With a batting average of .500 and an OBP of .556, the young catcher is absolutely killing it, but not without a lack of hard work. “I was a late bloomer, always smaller than my teammates,” says Pickelsimer. “I finally caught up physically, but I kept that drive to work hard.”

Head coach, Landon McNeil appreciates her work ethic; “she has a high motor with a workhorse mentality,” says McNeil. “Although her main position is catcher, we are able to plug Logan in wherever she is needed and is always able to execute at a high level.” With no decision on where to go yet, Pickelsimer has big plans to play at the next level. She has the drive to get there, and “is known to have clutch hits in big situations,” says McNeil.

One of those big situations happens to be Pickelsimer’s favorite softball memory. “I hit my first grand slam last year at the Texas Gold Cup in Houston,” says Pickelsimer. Her versatility and work ethic will take her far, and we can’t wait to see where she ends up! Congratulations Logan! 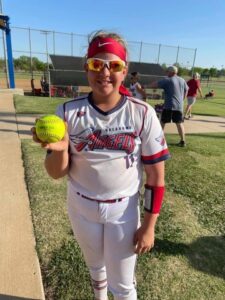 Speaking of clutch players, our next player to introduce for the Alliance Fastpitch Player Recognition Program is Addison Dodson! Dodson is a member of the Oklahoma Angels ‘08. Not only can she pitch the ball well, but she can hit it, too! Her batting average stands at a strong .510, and her OBP is a .546! You can also count on Dodson in big-time games, as well.

Her favorite softball memory was hitting her first homerun; “we were playing in the semi-finals, and we were in ITB. I hit my first walk-off homerun,” says Dodson. She also states she wouldn’t be where she is now if it wasn’t for her older sister, Lili. Dodson would watch Lili play growing up, and wanted to be just like her.

Head coach, Lesley Martin, sees just how great Dodson is, on and off the field; “Addison is an extremely hard worker.  She is a huge asset in the lineup and holds her own on the mound as well.  She is a great kid that is very coachable and gets along with all her teammates. She has a very bright future ahead.”

Addison has a future that we can’t wait to see! Congratulations and keep up the good work!