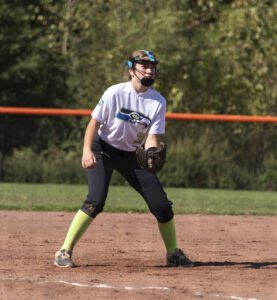 The North East Fastpitch League (NEFL) is thrilled to announce the April Player of the Month Chayse DellaRocco from Shelton, Connecticut. For the remainder of the 2021 Season, we will highlight top performing NEFL players in our different age groups.

Dellarocco is an extremely well rounded athlete with a top notch game IQ. She is definitely a game player to watch during this upcoming season. Chayse is a native of Shelton, Connecticut where she will attend Shelton High School and graduate in 2026. She explains “I knew my dad played baseball, and together we played a lot of Wiffle Ball in the yard. I fell in love playing and it was my favorite thing to do.” Chayse says “I asked my dad if there is baseball for girls. We looked into it and he signed me up for softball.  I have been playing ever since.”

Defensively Chayse is a third baseman who holds down the left side.  She stands on the right side of the box and power comes easily to her. Dellarocco’s head coach Eric August had nothing but positive things to say about Chayse.  “She is an invaluable member of our team.  She leads by example and her presence in the field and at the plate speaks volumes. Since joining our team, Chayse has anchored our defense at third base and solidified the middle of our lineup. Chayse is the kind of player that not all teams have, but certainly need to be successful.  Chayse’s quiet approach at the plate is surpassed by the production she provides, big hit after big hit.  She’s clutch – simple as that.”

One of Chase’s favorite memories was starting on the All-Stars team with the older girls. She explains they all have stayed very close friends ever since. Well done and congratulations to Chayse Dellarocco from the Connecticut Seahawks team for being recognized as the NEFL Player of the Month for April!