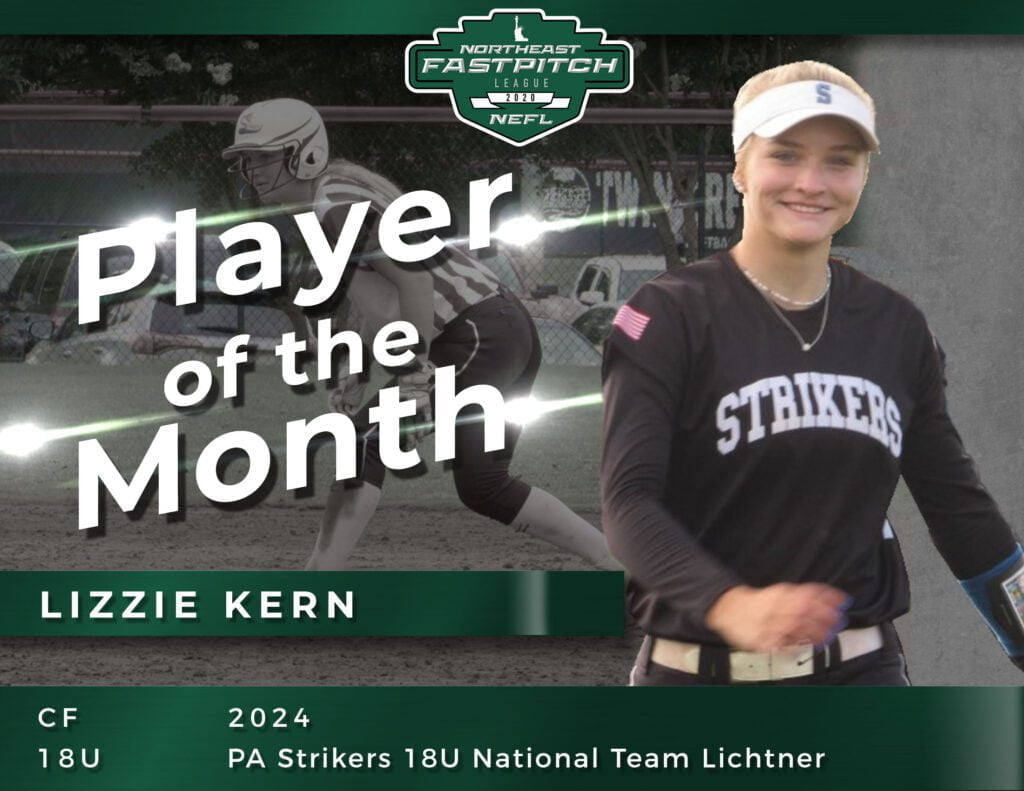 The Northeast Fastpitch League is excited to announce the HFL’s November Player of the Month: Lizzie Kern!

Representing Downington, PA., Kern is a 2024 graduate competing for PA Strikers 18U National Team Lichtner. Kern was steady at the plate in November hitting .545, seven RBIs, a home run, and four stolen bases.

COACHES FEEDBACK:
Lizzie Kern is a powerhouse centerfielder with a cannon. She is an incredible teammate on and off the field and truly is the definition of a player that “leads by example.” She may be quiet and always has a smile on her face but she is a force to be reckoned with. Lizzie is one of the most selfless and relentless kids that I have had the opportunity to coach and I truly cannot wait to watch her continue to grow. She is going to do big things as a player and individual.

MEET LIZZIE:
Q: Can you share a little bit about your softball story?
Kern: My mom played softball at Ursinus College and my older brother played baseball so I was around it a lot and my mom encouraged me to play. I played 2 years of West Bradford Little League Wildcats when I was 7 and 8. When I was 9 I tried out for the 10U PA Strikers and made the team. I have been a Striker ever since (this is my 7th season with them).

Q: What is your favorite softball memory?
Kern: My favorite softball memory is going to Colorado with my team this past summer. The first few days we were there we played so well and won games against some really good teams from California. The team was having so much fun and the energy on the field and in the dugout was awesome. Along with that, we were all staying in a house together (it was called The Good Vibe House and was really cool). While it was chaotic most of the time (all 15 of us stayed there with our coaches), we had SO much fun. We were able to bond and get to know each other so much better which played a huge part in how well we played that week. We also had a lot of free time to do cool stuff like shop in Boulder, drive to the top of a huge peak in Rocky Mountain National Park, and check out the Red Rocks Theater. I can’t wait to go back next summer!