Starz Premier- “One Team, One Heart”

Starz Premier 14u “One Team, One Heart” 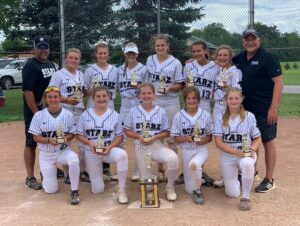 “One Team, One Heart,” is the motto of this dynamic western New York Starz Premier 06 team, part of the North Eastern Fastpitch League. This young squad has won tournaments up and down the coast from Ohio all the way down to Florida. Even more impressive, is the fact that they have been winning for years! They have won eleven separate championships and recently won a 16U gold title while playing up an age division.

Notably, this team aptly called the “Starz”, is coached by two men who are fully vested in their players of the present, and for their success in the future. Even though this group is made up of mostly middle school players, Coach Tony Farina and Aaron Nuwer already have them prepared with an eye toward college and the recruiting process. With pride, Coach Tony shared, “We work hard in practice and always remember that two words create a future and they are ‘student/athlete’.” Currently the Starz boast a team GPA of 3.7 and each team member is encouraged to keep a list of colleges they aspire to attend.

The team has collected an impressive 112 wins in their last two seasons. There are 12 girls on the current roster and each one brings a special talent to their squad. Impressively, one of the catchers on the team, Mia Vanelli, is the NEFL featured player of the month. When Mia is not catching, she is a 3rd baseman and has a batting average of .374 with a slugging percentage of .595. Her fellow catcher, Jessica Hymers led the team in RBI’s in their first season together and is known for her power hitting and strong arm behind the plate. Coach Farina also pointed out that these two young ladies are hard workers at all times and better yet, are all around great kids.

Another spotlight pair in this group are two players that excel in the positions of pitcher and shortstop. Ava Farina, one of their pitchers, possesses a record of a combined 611 strike outs and an ERA under one in the last two years. This 2025 graduate has the second highest batting average on the team and led the team in RBI’s last season. Matching Ava in the hard work department is 2024 graduate, Erin Nuwer. Coach Tony quotes, “Erin is the spark-plug for our team, as our lead-off batter.” She carries a sweet .416 batting average and when she is not playing short she has an 18-2 win record in the circle.

“We are a local group,” says Coach Tony, “we want to work as hard as we can to be ranked on the national level. Our goal is to place in both the Alliance and National Top 25.”  While the world is discovering new ways to address activity during the Corona pandemic, this team follows protocols but never relents in their pursuit to grow. They espouse a philosophy of togetherness and literally wear the “One Team One Heart” logo on their practice uniforms as a constant reminder of what sets them apart. “This is what we preach before every tournament, we always go in remembering we are one!” says Coach Tony with pride.

The Starz honor the sport by studying the competition and always scheduling to play teams that will push them to raise them to the highest level. Ava Farina notes, “We are in a lot of Sunday games. Softball players at every level know what that means and the mental and physical strength it takes to be there and continue to perform. We come together as a team on that level and always have the desire to push ourselves to be the best we can be every time we take the field.” Ava also shared a memory of a game in the Florida fastpitch tournament in which she, “had to switch hit from right to left because of an injury and hit a bases loaded triple over the left fielder’s head to win the championship.” Ava always wants to be at her best and knows that her teammates are always pushing themselves as well.

If you want to get a firsthand look at this group of Starz, check out their schedule on the team website or follow them on twitter as they play a very competitive schedule for 2021.