Anissa Acosta Recognized as PCFL Player of the Month for April

May 14th, 2021 – The Pacific Coast Fastpitch League (PCFL) is excited to spotlight Anissa Acosta as Co-Player of the Month for April in our Alliance Player Recognition Program. For the remainder of the 2021 Season, we will highlight top performing PCFL players in our different age groups.

Anissa plays 3B and Pitcher for Firecrackers Hollywood 18u and is graduating from Campbell Hall School (North Hollywood, CA) this spring. She had a very successful h 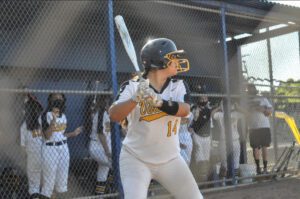 igh school season this year. During her first game this season she went 3-4 with two doubles, a triple, and one RBI. In the second game she went 3 for 3 with an impressive two grand slams, a double and 10 RBIs. During the third game she went 2 for 3 with two doubles and one RBI and in her fourth game, she went 1-3 with a double. With 6 more games left in her final high school season, watch out for her as she continues to dominate at the plate.

“President Theodore Roosevelt famously said, “speak softly and carry a big stick; you will go far.”   If President Roosevelt was referring to softball players and not his approach to foreign policy, his familiar words could easily describe Anissa Acosta”. Her coach talks so highly of Anissa, “From the time she stepped on a field at age 6, Anissa has always preferred to let her athletic performance speak for her, and over the years it has spoken volumes!  From rec ball and all stars, to travel ball and high school, Anissa has been a force on the field, offensively and defensively”.

Acosta talked to us about how she got started in the game, “I first started playing softball at the age of 6 when my dad put me on my first recreational league team. I did not know much about the game but knew that my older sister played, so it had to have been fun. As I got older, which led to the competition getting better, I knew that I loved softball and that I wanted to play at the next level. The reason I continue to play is because I love the excitement I feel right before I get onto the field and the sisters I’ve made because of it”.

When we asked Anissa what her favorite softball memory was, she responded with, “My favorite softball memory has to be my freshman year when my previous high school team won the CIF LA City championship. It was a very tight game, but we played as a team and eventually got the win. It was the best feeling in the world knowing that all of those early morning lifts and hard work paid off in the end”. Anissa Acosta is from Los Angeles, California and is committed to College of Staten Island. We look forward to watching her grow as she continues her career at the next level.

Congratulations to Anissa Acosta from Firecrackers Hollywood 18U for being recognized as the Player of the Month athlete for the PCFL in April.