Ayla Tuua named PCFL Co-Player of the Month for May 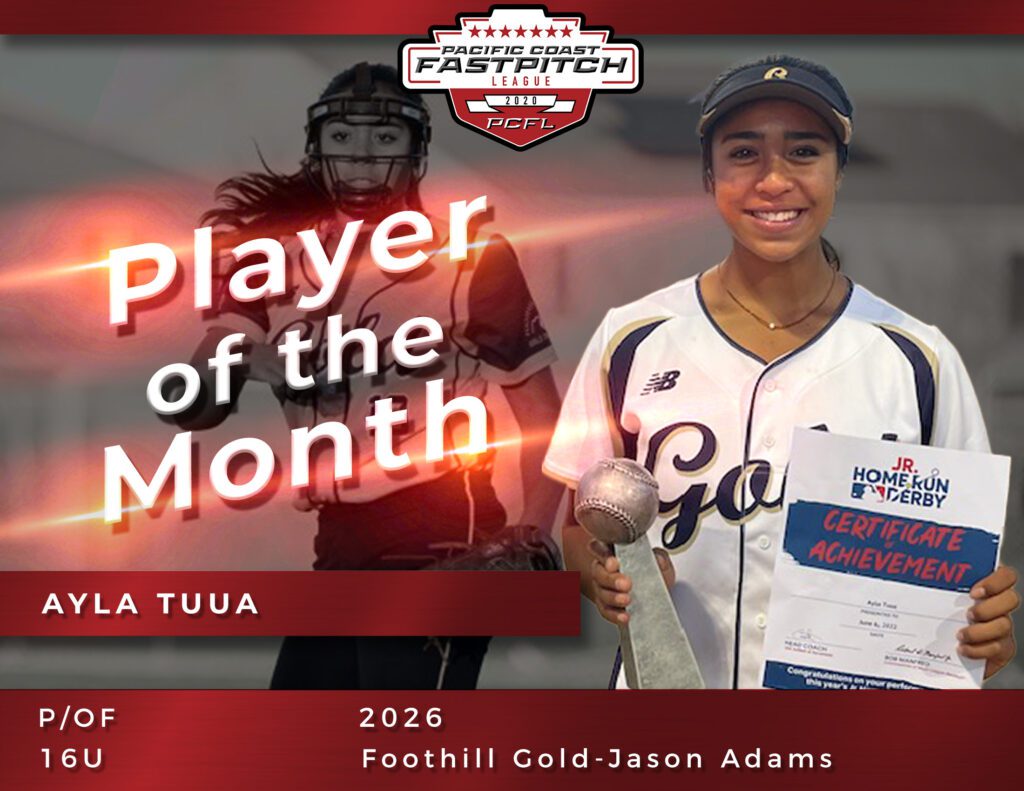 The Pacific Coast Fastpitch League (PCFL) is excited to spotlight Ayla Tuua as May’s Co-Senior Player of the Month. Tuua is a Pitcher and Outfielder for the Foothill Gold.

“Ayla is a very dynamic young player, she’s a 5 tool athlete from an amazing softball family,” Coach Jason Adams said. “Her ability on the ballfield is incredible and at such a young age too. She will dominate games at times and does all the little things that matter so much as well as brings power in the circle and at the plate way beyond her years.  Remember the name Aya Tuua, she will be a shining star at the next level someday!”

Ayla Tuua’s Softball Story:
“I was 5 years old when I started playing softball. My parents wanted to wait another year before letting me start playing, but I begged them to play. I started on my sister’s 8u rec ball team as a catcher. Everyone else was too scared to catch because the pitcher was older and threw harder. I wanted to catch her because that meant I got to play all the time! But after a couple more years of playing, I started to take an interest in pitching. Once I got started, I realized that I loved being in the circle and decided to stop catching to dedicate my time to pitching.”

Ayla Tuua’s Favorite Softball Memory:
“My favorite softball memory is hitting a homerun in Hall of Fame Stadium in Oklahoma City. I was invited to represent region 10 for the 12u All-American Games. I was very excited that I had this amazing opportunity, but I was also very nervous because I didn’t really know what to expect. On the first day I got to meet everyone on my team from all over the west coast and Hawaii. We had our first practice just trying to get some nerves out, get used to new teammates and to feel what it’s like to play in Oklahoma heat! The next day, our very first game was in the stadium-the same field I watched my favorite players compete on for a national title! I was completely awestruck! Once we started the game, all I could focus on was hitting. All I wanted to do was get a good hit in the stadium. And when I finally got up to bat, I felt like I couldn’t breathe. I saw my name on the jumbotron right behind the centerfield fence and knew that I was going to be fine. I had 2 strikes on me, but I knew that I wasn’t going to strike out. The very next pitch was the best moment in my softball career. It was a perfect pitch and I didn’t even feel the ball hit off my bat, but I saw it fly straight over the centerfield fence. While I was running the bases it made me realize that I wanted to not only play in a tournament on this field, but win a college national title on it too.”

From all of us at the Alliance and the PCFL, congratulations to Ayla Tuua for her achievements.