Brooklyn Paratore named PCFL Co-Jr. Player of the Month for May 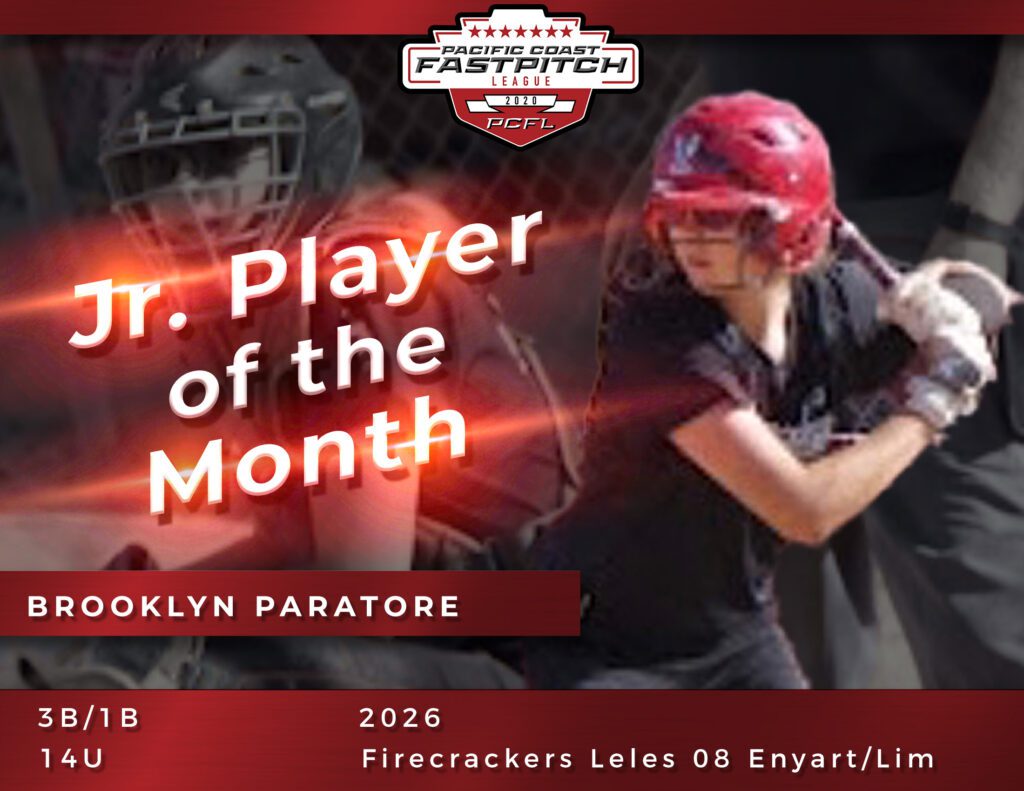 The Pacific Coast Fastpitch League (PCFL) is excited to spotlight Brooklyn Parastore as May’s Co-Junior Player of the Month. Paratore is a 1st and 3rd baseman for the Firecrackers Leles 08.

“Brooklyn is the best pure hitter I have ever coached and Brooklyn possesses the mental toughness and drive that will propel her to reach her full potential,” said Coach Enyart.  “Brooklyn never misses the extra rep behind the plate or the extra round of hitting before the game, and she is always thirsty for additional coaching.  Brooklyn loves softball so much that she would play every inning of every game over the course of a long weekend and then after the championship game she would ask me to stay late to get in extra work.  She is relentless in the best way possible.  Moreover, Brooklyn is an amazing teammate and does everything she can to make those around her better with encouragement and support.  Simply stated, Brooklyn is the dream athlete to coach and there is no limit to what she can achieve and I am excited to see where she leads her team!”

“I was born in Seattle and have lived in both Arizona and California,” said Brooklyn.  “My mom signed me up for little league in Davis, CA when I was 5 because she told me, “That is what you do, you try all the sports”. I tried soccer, softball, basketball, tennis, and golf before I decided softball was my absolute passion. I played a year with the boys in Little League, multiple years for the rec softball league in Davis,  until I finally found my home with Firecracker Leles in Rancho Cordova, CA!”

“I have so many great memories due to softball its hard to choose just one. None of my softball memories would have happened without my amazing coaches and teammates. If I had to choose just one memory, it would have been my first over the fence homer that actually happened this month. Hitting that ball felt like nothing I have ever experienced before and seeing my coaches and teammates cheering me on at home plate was amazing.”

From all of us at the Alliance and the PCFL, congratulations to Brooklyn Paratore for her achievements.