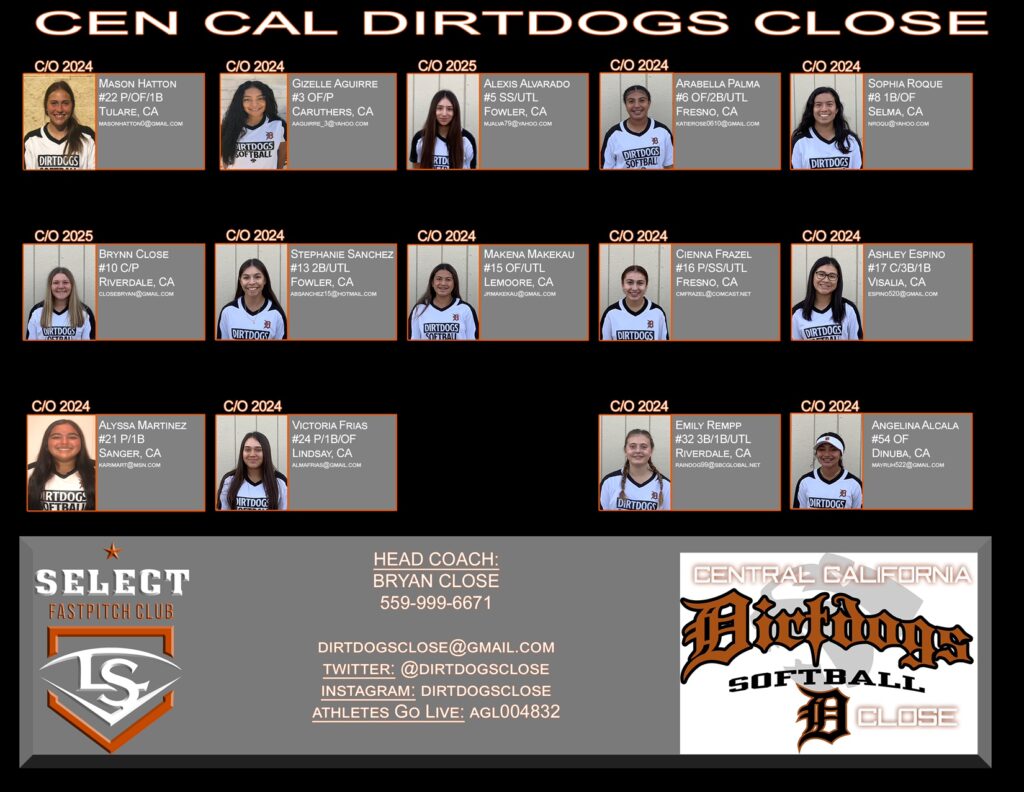 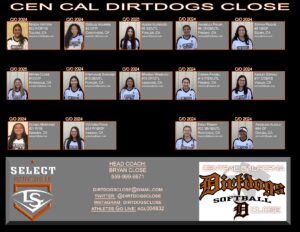 to spotlight the Cen Cal Dirtdogs – Close 14U team this week. For the remainder of the 2021 season, we will continue to spotlight several teams in the PCFL in each age division.

The Cen Cal Dirtdogs – Close 14U team started as a developmental 8u team out of Riverdale Ca, coached by Bryan Close. Coach Close has been involved in the game fore over 22 years. He truly loves the game, and the team has now been together for 8 years and will be entering the critical stages of recruitment.

Coach Bryan Close talks about how this squad is a tight group, “”The team dynamics are special because they have only played with each other since the ages of 6-7 years old.; 10 of the 13 players have developed together and have truly become family!”

After interviewing player, Victoria Frias, we learned a lot about her and the team. Her favorite tournament was when the team went to Arizona for the first time. Victoria can pitch, or play 1st and 3rd, and she started playing at 8 years old. Her favorite softball memory: “When we were playing in Huntington Beach and we went into extra innings against the Corona Angels. The whole team was cheering, and we won the game at 10u.” A team goal of hers is to compete at the highest level and a fun fact about her is that she used to want to play outfield.

The biggest accomplishment for this team is their development over the years. This team started as 6-7 year old’s playing in the 10U division. The process was long, but the development and growth was seen every weekend. By the time they were a true 12U team, they made it to the big stage and were finalists in several Triple Crown events such as the Mother’s Day tournament and April’s Finest. Another big thing to note is they qualified in Lake Elsinore for the 12U PGF Premier Nationals.

The girls on this team love the game and have a strong bond with their teammates. “Eventually, you realize that your teammates are more than just people who wear the same uniform.  They are Dirtdog Family. They are Dirtdog Sisters!” said Sophia Roque #8. “The most exciting moment would have to be earning the PGF Premier Berth on our own.” stated Brynn Close #10. And Alexis Alvarado #5 stated, “Even when you make the play of your life, it’s the feeling of teamwork that you will remember. We will forget the plays and scores but never forget this team.”

A fun fact of the Dirtdogs is that one of their pitchers, Victoria Frias played on the team for two years before telling them that she pitched.  She taught herself how to pitch off YouTube and wanted to make sure she was ready before actually getting on the mound. In 2019 she was their only pitcher and led the team to a Qualifying PGF Premier Berth by pitching every inning that Summer.

The Cen Cal Dirtdogs-Close 14U have big things ahead of them. Be on the lookout for this team as they compete in the PCFL this season.