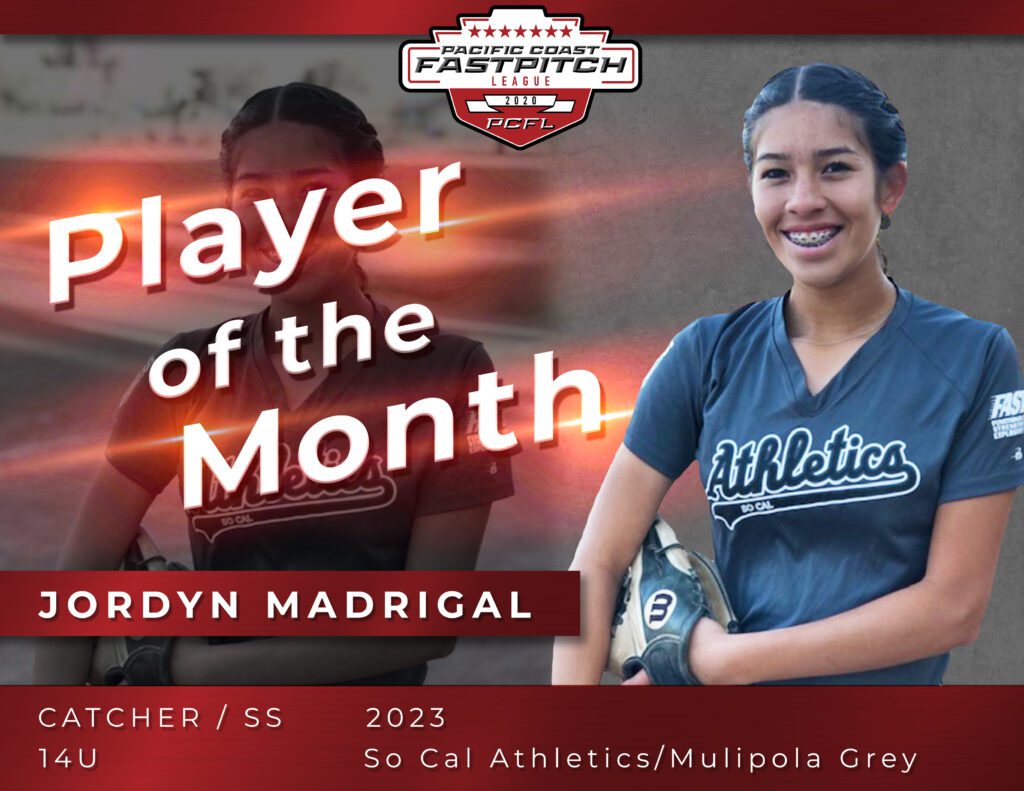 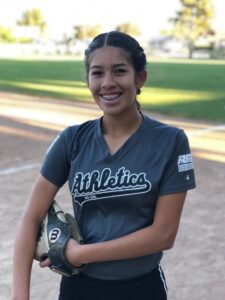 April 12th, 2021- The Pacific Coast Fastpitch League (PCFL) is excited to spotlight Jordyn Madrigal for March’s Player of the Month in our Alliance Player Recognition Program. For the remainder of the 2021 Season, we will highlight top performing PCFL players in our different age groups.

Jordyn is from Victorville, CA and plays for the SoCal Athletics Siofele/Mulipola. She will be attending Victor Valley High School (2025) in the fall as she is currently an 8th grader at Hook Junior High School.

Jordyn aka (Jo or Jordy) is coming off a Fall 2020 in which she led her SoCal Athletics Siofele/Mulipola ’07 team with a .518 batting average; hits (29); extra base hits (11) & who didn’t strike out in 56 at bats. This multi-dimensional catcher & middle infielder has her Siofele/Mulipola team primed for the tournament season & is hitting .358 this Spring with a team-leading 24 hits, including 2 HR.

One of her Club coaches describes Jo as, “An athletic catcher, evidenced by her use as a MIF when not behind the plate, who has 5-tool skill & is very coachable.” Another Club Coach says of Jordyn, “There is no secret to success…..it’s hard work & Jo gets it.  She is one of the hardest workers in our program.”

When we asked Jordyn about her favorite softball memory, it actually came from an Alliance Tournament! She responded with, “We were down 2-0 in the sixth inning. As a group we decided to play our hearts out and fight for the girls standing next to us. We put our individual needs aside and came together as one. The chemistry we have as a team and the energy in the dugout that night was amazing. Knowing that I was not alone in the box helped tremendously. I ended up singling to right field and bringing in the go ahead run. Looking back and seeing my teammates jump up and down and scream pumped me up so much. I want to bring that kind of energy to every practice and game. We ended up winning that game 6-2.”

Some interesting facts about Jordyn is that she has a 4.0 GPA, She works out with Coach Neil Siofele and his F.A.S.T.E.R. (Functional Athletics Strength Training Explosive Running) program, which has vastly improved her explosive movements, agility & conditioning, and also works out with no nonsense catching coach, Ed Mulipola, who knows what it takes to be an Elite backstop as he groomed his daughter to get to the Olympic level.

Congratulations to Jordyn Madrigal from the So Cal Athletics Siofele/Mulipola team for being recognized as the Spotlight Athlete from the PCFL in March. Watch out as she continues to compete in the PCFL this season.