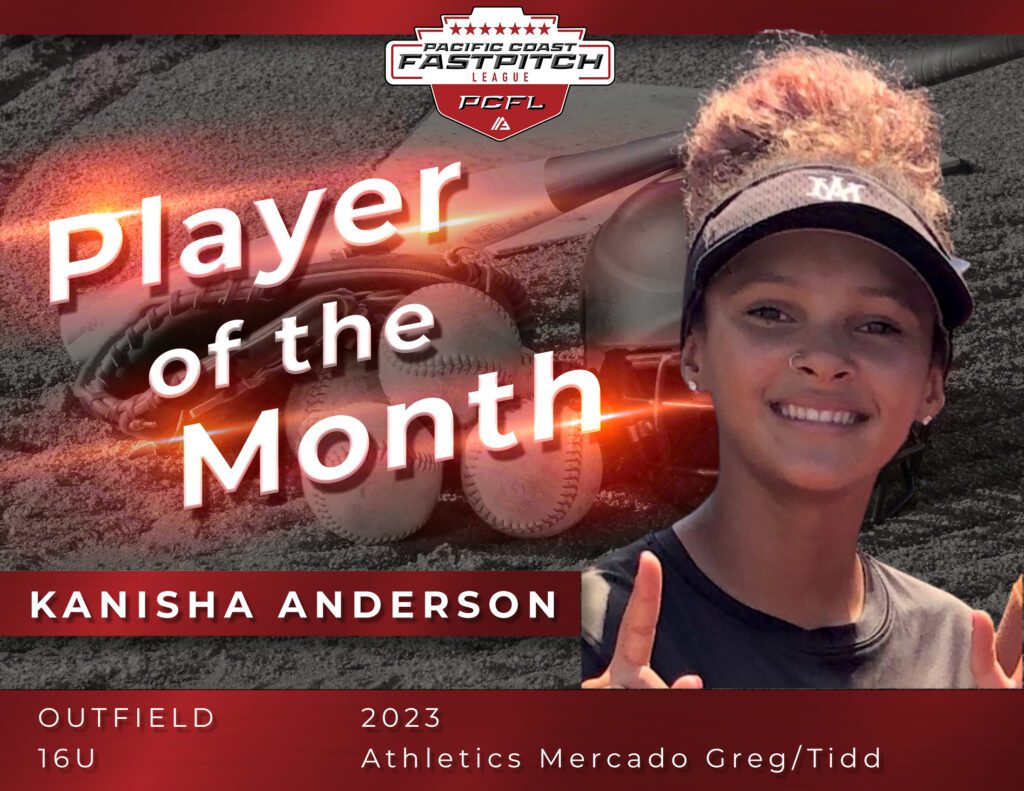 Pacific Coast Fastpitch League (PCFL) is excited to spotlight Kanisha Anderson as the July player of the month. Anderson is an outfielder on Athletics Mercado Greg/Tidd 16U.

“Kanisha is a premier player and had a great summer in all the top events against the best teams in the nation. She hits in the 9-hole for us and always flips the order to the top of our lineup,” her coach said. “She hit close to .600 for the summer with a lot of clutch hits including a 11 pitch at bat in the bottom of the 7th with two outs in the TCS National Championship down by one. She came up with a base hit to left to tie the game and extend the inning where we scored 8 runs and ended up winning the National Championship. Kanisha has track speed on the bases and in the outfield. The sky is the limit for Kanisha, I can’t wait to see what she accomplishes in the next couple years with our Academy.”

“I have 2 favorite memories of softball. The 1st is when my dad was my softball coach and I hit my first homerun and he ran on the field and picked me up,” said Kanisha. “My mom was in the stands doing her thing and everyone that knows my mom knows she is so extra in the stands (cheering and sometimes dancing). They are both my biggest fans and I wouldn’t be here without the push from them. My 2nd favorite softball memory is when I was in 14u and my team was playing in a Texas tournament. Our coach B. Tidd, was driving our team around (all together) and us girls decided to play “our type” of music. Let’s just say Tidd did not approve, the look on his face was priceless. Of course, he turned it off, which we knew he would, but it had us all laughing. Good times!”

From all of us at the Alliance and the PCFL, congratulations to Kanisha Anderson for her achievements.