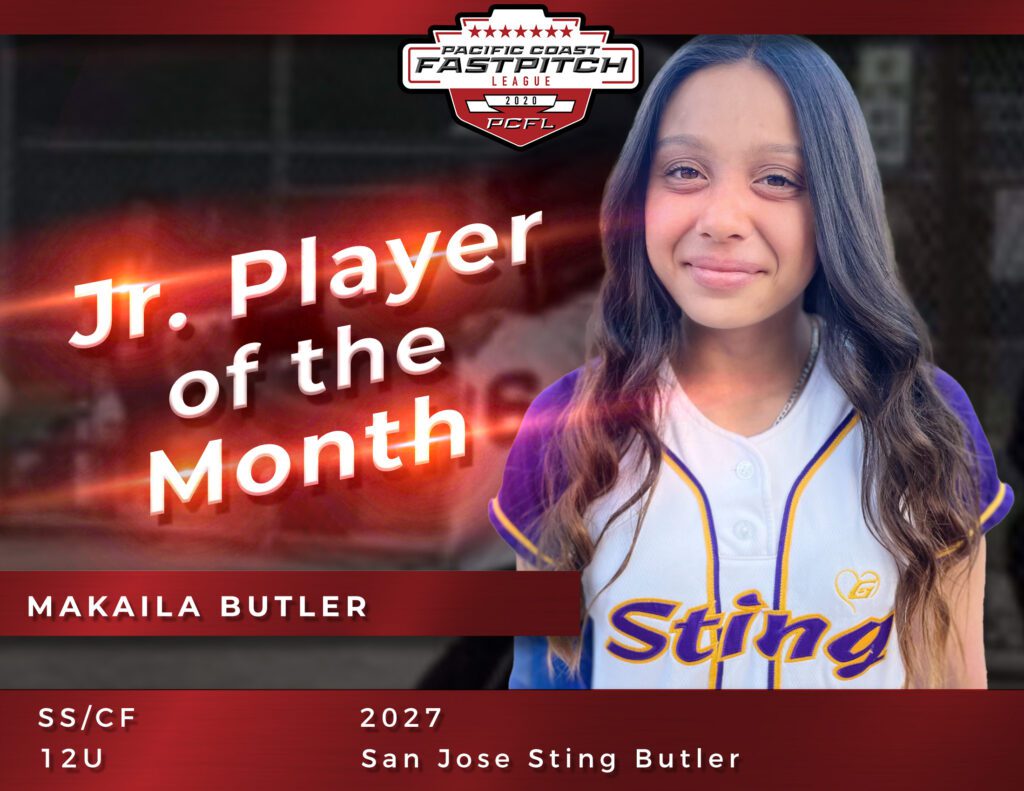 The Pacific Coast Fastpitch League (PCFL) is excited to spotlight Makaila Butler as April’s Co-Junior Player of the Month. Butler is a shortstop and center fielder for San Jose Sting.

“I started playing softball when I was 4 years old in Tball and thought it was not for me, but then I watched my older sister play for her Summer Team that year and I decided I wanted to play softball at a high level. I started to work hard and play with older kids so I could get myself better and asked my dad a lot of questions about the game to help me understand too. So now I have been playing softball all year round since then to work hard to help my team be the best we can be. I also enjoy playing basketball for my middle school when I have time because it keeps me in shape too.”

“My favorite memory is when I hit my first home run when I was 6 (playing 8u), and how great it made me feel that I helped my team score runs, and how awesome it was when all my teammates came out to cheer for me, even though we didn’t win the game I still remember it like it was yesterday!”

“Having watched Makaila develop as a player and teammate over her time in Softball has been a pure joy,” said the head coach. “Makaila will watch and see what other players do and work hard to replicate that success, it has made it easy to coach her and watch her abilities take over on the field. Even from a young age Makaila has tried to be a team leader, often as the youngest player on the team, and works hard to be a great teammate on and off the field. Softball, as a team sport, requires unselfishness to succeed, and we move her around on the field and in the line up to help our team be as successful as possible, and she never complains… We are very proud of our #26 being selected for this honor!”

From all of us at the Alliance and the PCFL, congratulations to Makaila Butler for her achievements.