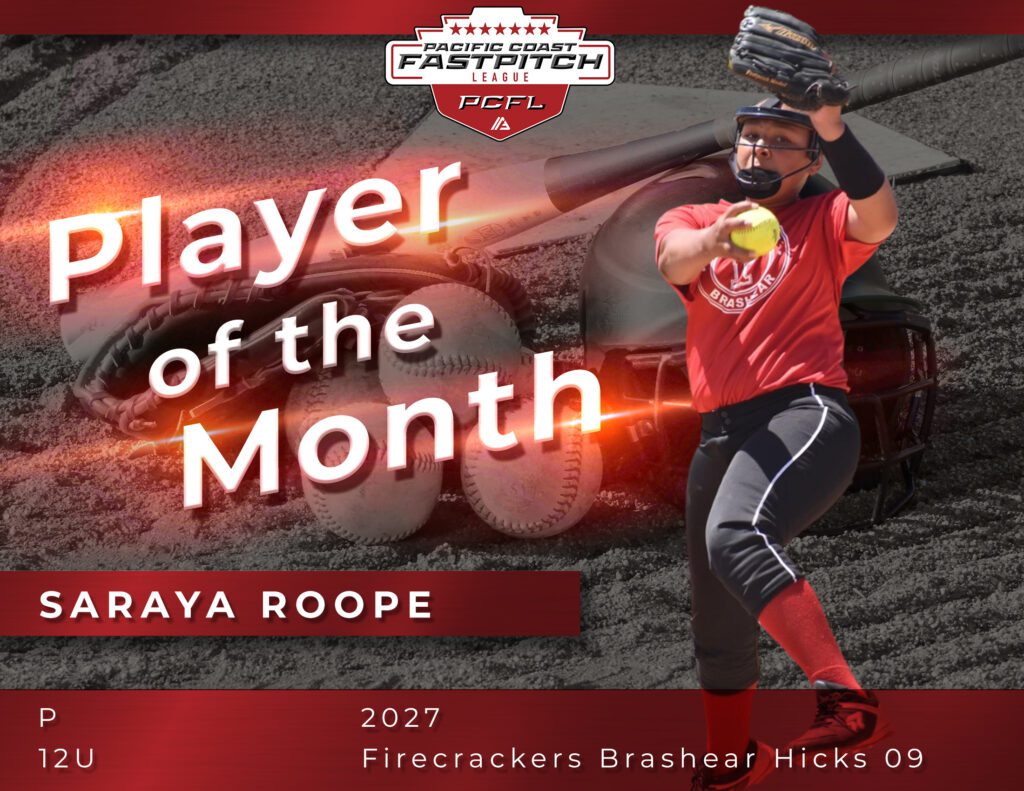 The Pacific Coast Fastpitch League (PCFL) is excited to spotlight Saraya Roope as the September Junior Player of the Month. Roope is a pitcher on Firecrackers Brashear Hicks 09.

“Saraya is a fierce competitor on the field whose talent blends raw power with graceful athleticism,” said coach Micah Rutkoff.  “She also is a natural leader in the dugout, setting the example for her teammates to follow. Her joy of the game is easily seen by her infectious smile and positive attitude. Saraya is one of those players that makes all of the work that goes into coaching softball so worth it.”

Saraya has been playing softball since she was 4 years old. “My older sister Samaria played rec ball, then travel and is currently playing at the college level at a DII school in Colorado,” she said. “So I have basically grown up on the softball field and my mom says I have been watching softball since “conception”. I am a pitcher and play short stop and more recently playing 3rd as well.”

Saraya has a lot of softball memories, but her favorite is when shew as in a tournament with her last travel team. “I didn’t know the score but I know we were down by 1 run. I was up to bat and we had 2 girls on base. I got a really good hit deep and tried to take 2nd base but they got it in quickly for a close play at 2nd. I slid but the girl tagged me out hard and took me out, I even cried. My coaches both came out to the base to see if I was alright and help me back to dugout and they said the first thing I asked was “did the 2 runs score? The two runs did score and we ended up winning the game!”

From all of us at the Alliance and the PCFL, congratulations to Saraya Roope for her achievements.