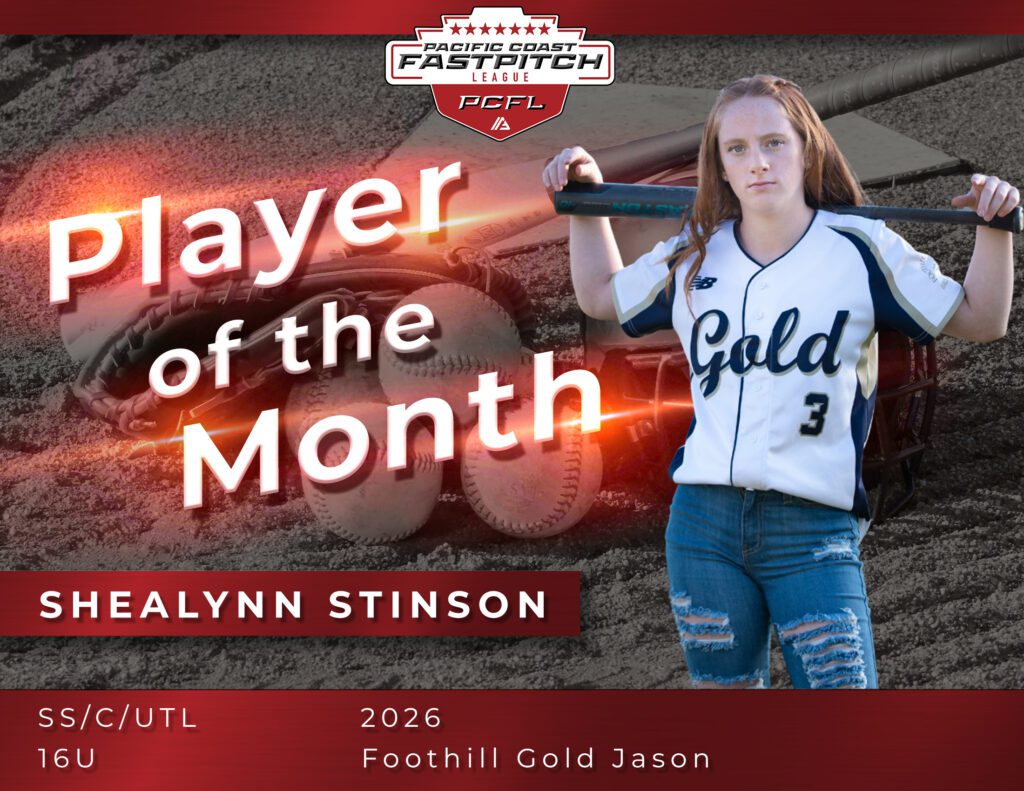 The Pacific Coast Fastpitch League (PCFL) is excited to spotlight Shealynn Stinson as the October player of the month. Stinson is a 2026 on Foothill Gold Jason 16U.

During the month of October, the 2026 posted a .583 batting average with seven singles, four doubles, three triples, one homerun and 10 RBIs. The speedy Stinson stole 5 bases with a .586 OBP.

“Shea is a coach’s dream in that she works the hardest, smiles the most, laughs the loudest, and leads her team in many ways,” said coach Jason Adams. “Her dedication to the sport is unsurpassed and you can see that in her success. But more than that Shea leads by example, she one of if not our fastest player, she hits for average and power and plays shortstop like a seasoned college veteran at a very young age. The softball world will surely hear the name Shealynn Stinson on big stages in the future.”

Shea grew up watching her brother play travel baseball. “I fell in love with the opportunity to travel and the competition that travel baseball held for my brother,” she said. “I grew up in a competitive family, I wanted to be better than my brother. I went to my first softball try out when I was 9, in 2017, with Foothill Gold Woodcock’s 10u team. Fun fact, at that time I was already playing comp soccer and I cried all the way to the try out because I feared the thought of not making the team. From that point on I have been playing travel softball for Foothill Gold and have a dream to play for a college in my future.”

Shea’s favorite softball memory is a recent one. “On September 12, 2021, my current 16u team was in the semifinals in a must win game to get into the championship. In the bottom of the fifth, the score was tied 3 to 3 with runners on first and second. I was up to bat and on the first pitch I hit my first homerun to get us in the championship walk off style.”

From all of us at the Alliance and the PCFL, congratulations to Shealynn Stinson for her achievements.