Brooklyn Cardenas named RMFL Player of the Month for March

Brooklyn Cardenas named RMFL March Player of the Month By: Arielle Gordon    The Rocky Mountain Fastpitch League (RMFL) is excited to spotlight Brooklyn Cardenas as the March player of the month. Cardenas is a pitcher on Colorado Batbusters 06, a 14u team in the RMFL.    In March, Cardenas pitched a total of 24… 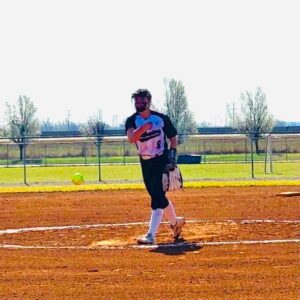 The Rocky Mountain Fastpitch League (RMFL) is excited to spotlight Brooklyn Cardenas as the March player of the month. Cardenas is a pitcher on Colorado Batbusters 06, a 14u team in the RMFL.

In March, Cardenas pitched a total of 24 innings and recorded an outstanding 0.29 ERA. She struck out 32 batters while only issuing six free passes. Her opponents only recorded 14 hits against her and Cardenas earned a 3–0 record with a 0.83 WHIP.

“I love that feeling that you get when you work really hard at a skill and it starts to work and make you better,” said Cardenas.

“Brooklyn is a very intelligent pitcher,” coach Chad Burgess stated. “She has worked very hard at knowing how to attack hitters and has excellent control of her five pitches to attack hitter’s weaknesses.”

As of April 16, the Batbusters are in first place in the 14U RMFL standings, coming off a first place finish at the 16U age division in the USA Junior Olympic Scholarship.

Burgess also talked about how hard Cardenas works and he was not surprised to hear that she was honored for her performance this month. “She is a special player and I know we are lucky to see her compete every pitch, every play,” Burgess said.

One of her best memories having to do with softball comes from last year’s Top Gun. “I never thought of myself as a good pitcher, but after that game, people kept stopping me as I left the fields telling me what an incredible game I pitched,” Cardenas said. “It was a real confidence booster.”

From all of us at the Alliance and the RMFL, congratulations to Brooklyn Cardenas for her achievements.