Hadley Hudson named RMFL May Player of the Month 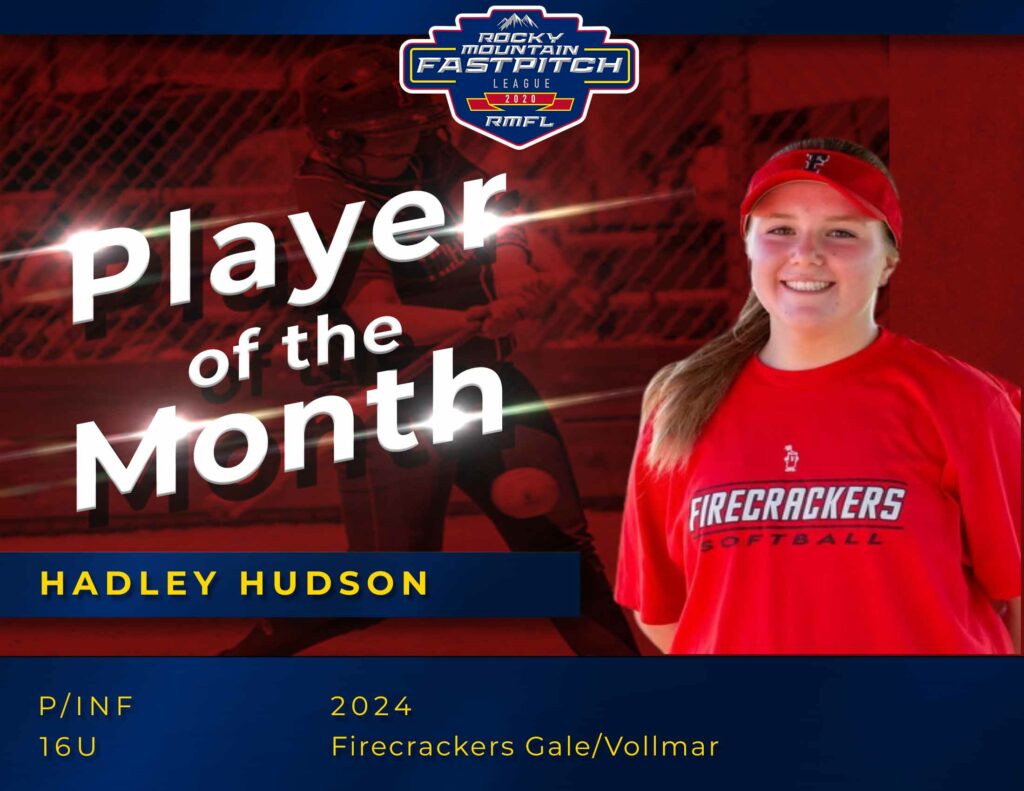 The Rocky Mountain Fastpitch League (RMFL) is excited to spotlight Hadley Hudson as the May player of the month. Hudson is a pitcher and infielder on Firecrackers Gale/Vollmar 16U.

In the circle, she pitched 41 ⅓ innings and struck out 44 batters. Hudson recorded a 3.31 ERA.

“For next season, I want to be consistently throwing 60-62 mph in a game and be able to locate my riseball on different plane levels and work towards throwing it for a strike,” Hudson said.

Hudson’s parents put her in T-Ball when she was four years old, she joined a recreational team at age seven, and hasn’t stopped playing softball since.

“I have had the privilege of coaching Hadley for the past seven years,” Firecrackers coach Kristen Vollmar said. “She loves the game so much and she is always working on some aspect to make herself better. She takes every opportunity given to her and runs with it!”

Hudson’s favorite softball memory is from the 2020 Colorado USA Softball State Tournament where her team made it through a double elimination bracket to win the championship.

“I pitched the first game of the two ‘championships’ and it was such a relief to strike out the batter to win and go on to the eighth and final game of the day,” Hudson said. “We were at the softball fields playing for 14 hours straight. I threw 384 pitches and had 33 strikeouts. I remember every game from that tournament, it was especially a big confidence booster for me pitching.

Hudson said she will cherish the memory of the tournament forever.

“You couldn’t ask for a better student athlete and young person to work with,” Vollmar said. “She is extremely coachable and just always wants to take in as much as she can in order to improve her game and better her team. I am always so very proud of Hadley on and off the field.”

From all of us at the Alliance and the RMFL, congratulations to Hadley Hudson for her achievements.