Peyton Gale named RMFL Player of the Month for February

Peyton Gale named RMFL Player of the Month for February By: Arielle Gordon    The Rocky Mountain Fastpitch League (RMFL) is excited to spotlight Peyton Gale as the February player of the month. Gale plays third base for two RMFL teams, Firecrackers Gale-Bricker 18u Gold, and has also recently joined the New Mexico Suncats 18u Gold….

Peyton Gale named RMFL Player of the Month for February 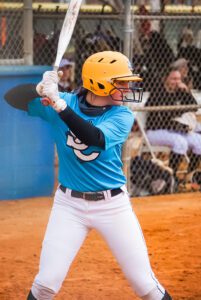 The Rocky Mountain Fastpitch League (RMFL) is excited to spotlight Peyton Gale as the February player of the month. Gale plays third base for two RMFL teams, Firecrackers Gale-Bricker 18u Gold, and has also recently joined the New Mexico Suncats 18u Gold. This is her 5th year playing at the 18u level and she is leaving her mark on the field and at the plate.

With the Suncats at the Heartland Fastpitch League Mid Atlantic Qualifier, Gale recorded 8 RBIs and an on base percentage of .333. In their five games, the Suncats recorded a 3-2 record facing two teams that have secured Tier l berths to the Alliance Fastpitch Championship Series and one team that has secured a Tier ll berth to the AFCS.

“This is the first year that I haven’t played with the same girls,” Gale said. “Meeting new players and getting new experiences and everything has been really fun.”

Her coaches describe her as an extremely hardworking player who has gap-to-gap power at the plate. When she was 14, Gale hit 10 homeruns.

Gale will graduate high school in the spring and has committed to continue her academic and athletic career at the University of Northern Colorado. She will be roommates with current Suncats teammate and soon-to-be Bears shortstop, Jaycie Gandert.

“My goal is to step on the field and prove myself and try to get a starting spot, and then work my way to try to be an All-American,” Gale said.

Last week, Gale was also named to the 2021 All-American watchlist. Her primary position is third base, but she can also play shortstop and outfield.

“After conversing with the kid, you don’t even have to ask what her GPA is,” Suncats head coach Jonathan Gandeert said. “It’s apparent Peyton is well rounded, genuine, and she loves to compete.”

Congrats to Peyton Gale for being named the RMFL Player of the Month!