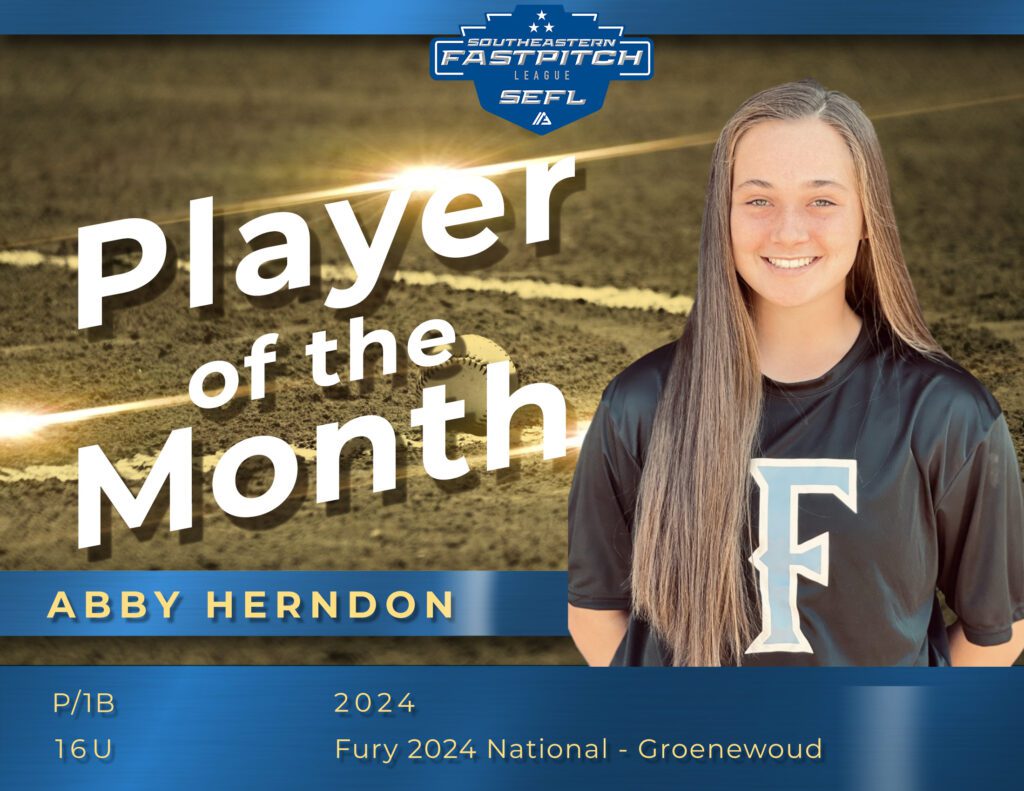 The Southeastern Fastpitch League (SEFL) is excited to spotlight Abby Herndon as the October player of the month. Herndon is a pitcher on Fury 2024 National Groenewoud.

“Abby’s success on the field is a direct reflection of her attention to detail, mature work ethic, and fierce competitive drive,” said her coach. “Abby has gone head-to-head with some of the best teams in the nation and she is quickly earning respect from her fellow competitors. As a coaching staff, we are very excited for Abby to continue to develop and compete at the National level.”

Abby fell in love with the game at a young age. “When I was 7 years old, my dad and I were at the high school practicing hitting,” she said. “There was a travel ball coach there also practicing with his older daughter who went to school at Brooks High School at the time. He came over and said, “who is that lefty hitting those lasers?” He and my dad talked for a while and, after that, my dad and his best friend started an 8U travel team called the Bombers. Me and all my softball friends from all-stars were on the team and the rest is history! I still play with 4 of those girls today and I love that!

“I’ve never been the strongest, tallest, fastest, or best player among the girls in the 2024 class. Since I was 8 years old, I would see all of these crazy studs in travel ball and think, “man, I want to play like that!” We started out competing against the best teams in our age group. I always had to put in so much work outside of practice to keep up and be able to compete against all of these talented players. It finally just became normal for me. It became my identity. I was just the player who went to the cages every day and hit, pitched, and took a round short hops. Finally, there came a time where I would look around and think – I’m as good as all these girls. Looking back, I think it was a blessing that I had to work so hard when I first started. It gave me the mentality and work ethic to continue to grind even when it gets hard. My travel team and high school teammates are just incredible. I love them all and they’re like a family to me. They are always picking me up when I’m struggling and excited for me when things are going well. I couldn’t do any of this without them. I also have the most amazing coaches! They push me, teach me, encourage me, and love me. I’ve been so lucky to have so many great teammates and coaches to help me!”

“My favorite softball memory was winning the 14U Alliance Tier 1 Q Bracket Championship this past July! We went undefeated through the Q bracket playing some of the best teams in the country. In the Q bracket championship game, we were up 3-2 in the bottom of the 7th inning. We had two outs but I had walked a batter which brought one of the best hitters in the country to the plate. She was an Extra Elite 100 top 10 player and crazy good. I threw two changeups for strikes to get ahead 0-2. I threw a chase pitch off the plate but she didn’t swing. The next pitch was one of the best drop curves I’ve ever thrown and I got her to swing through it. Our team exploded and I’ll never forget that moment!

From all of us at the Alliance and the SEFL, congratulations to Abby Herndon for her achievements.