Chelsi Ervin Recognized as SEFL Player of the Month for March

Chelsi Ervin Recognized as SEFL Player of the Month for March 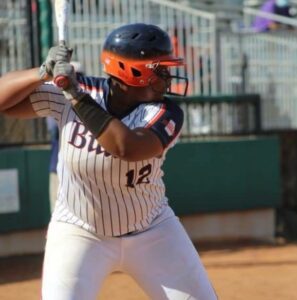 The Southeastern Fastpitch League (SEFL) is excited to spotlight Chelsi Ervin in our Alliance Player Recognition Program as our March Player of the Month. For the remainder of the 2021 season, the SEFL will highlight Players of the Month from each different age group.

Starting off the 2021 year, Chelsi Ervin has been dominant in the circle and at the plate for the for the 14U EC Bullets – Pace with impressive individual statistics and a dominant team to back her up on the mound. Chelsi has so far tallied 26 innings pitched through the year with an Earned Run Average (ERA) of 2.33. Throughout her innings pitched, she has struck out 23 batters with an almost perfect fielding percentage. Ervin has been impressive in the circle and at the plate for the EC Bullets 14U team, as so far this year she has batted .347 with an on-base percentage of .500, which have included 2 homeruns and 8 RBIs.

“Chelsi is one of the most dominant pitchers in the class of 2024”, said EC Bullets Head Coach. “She has great movement and spin with collegiate level velocity at just 14 years old. Chelsi also helped herself by coming in clutch with the bat as she drove in the winning run this past weekend to defeat one of our premier second year 16U teams.”

“I started playing softball when I was in the first grade. I didn’t really want to play, but my parents signed me up anyway. I remember being nervous in my first season because I didn’t know much about the game, but every time I stepped on the field, I became more comfortable. I started off catching for a few years, but then decided I wanted to be in front of the plate instead. After taking many lessons I found that pitching was my true love and have stuck with it ever since!” said Ervin when we asked how she got started in the game. Her favorite softball memory was when she hit 2 homeruns in one single game with one of them being the walk off to win the game.

Congratulations to Chelsi Ervin from the 14U EC Bullets – Pace for being recognized as the March SEFL Player of the Month!