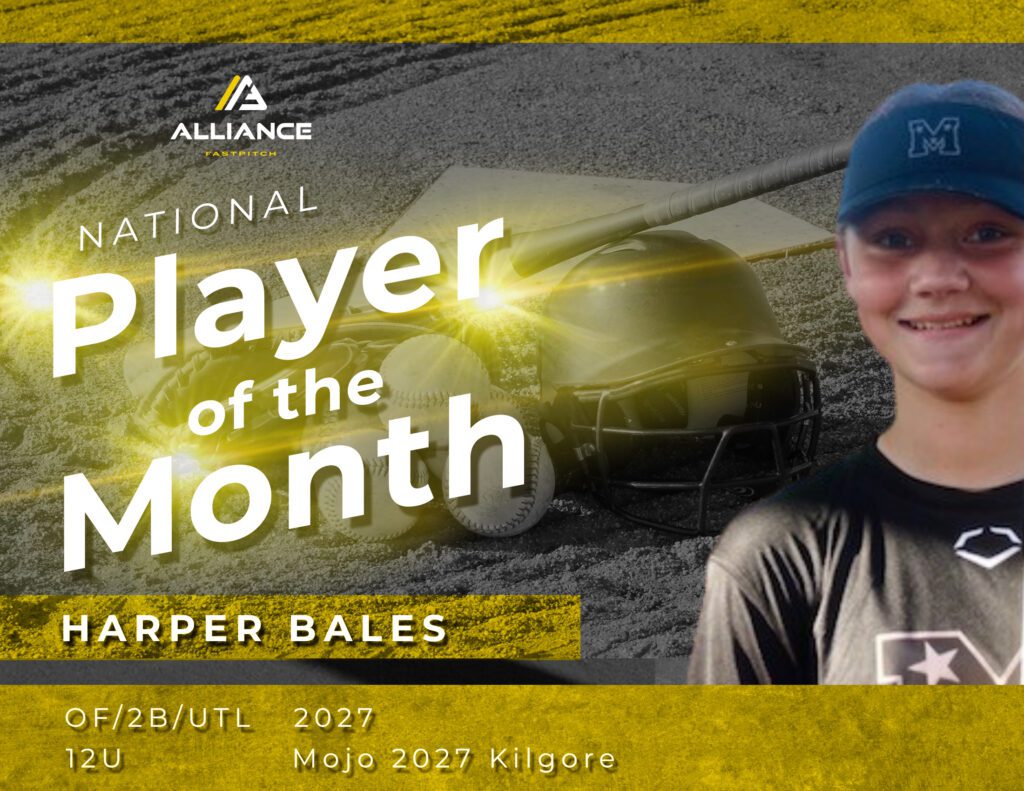 As part of the Alliance Fastpitch Player Recognition Program, we are excited to honor Southeastern Fastpitch League (SEFL) outfielder Harper Bales of Mojo 2027 Kilgore as the Junior National Player of the Month for her performance in October.

“Harper is a hard-working kid who never settles for second best,” said coach Scottie Kilgore. “Her work ethic and her willingness to better the team is one you don’t find very often. She is a selfless player who can and will play anywhere on the field in order to help the team to reach a goal. As far as her athletic ability, she is one of elite. Her main positions are OF and 2B, but you can also find her behind the plate or at SS occasionally. Her versatility is what propels her above the rest. Not only does she have the physical ability to play these positions, but her softball IQ is very high. She knows when and where to be quicker than most. Offensively, Harper is a gap-to-gap hitter with power to all fields. She has continued to grow as a hitter in her mechanics and discipline. In conclusion, Harper is a very talented athlete who can achieve anything she sets her mind to. We expect nothing but the best in her softball journey.

Harper started playing softball at the rec level at just age four. “I played there for several seasons before trying out for my first travel team,” she said. “Playing at that level of competition made my love for the game stronger, I knew then my goal was and still is to play college softball. Being part of TN Mojo 2027 Kilgore, Coach Scottie puts us up against some of the best competition in the country which is helping me get closer to achieving my goal.”

“My favorite memory is last year when my team, Mojo 2027 Kilgore, won the PGF Super Select in Columbia TN. Facing a great team in the championship game, we were down 3-10 and came back to win 12-10 in the top of the last inning. It’s not only that we won the championship that weekend; it is that my team and I did not give up – we battled. And that’s why I love softball!”

From all of us at the Alliance and the SEFL, congratulations to Harper Bales for her achievements.