How does the AFCS work? – FAQ’s for the Southeastern Fastpitch League

FAQ’s for the AFCS  By: Caroline Helmer   What is the AFCS? The Alliance Fastpitch Championship Series (AFCS) is the culminating event for the top teams in each Member League. It is a playoff-style post season event that will be held in late July into early August. The top teams from the Southeastern Fastpitch League…

FAQ’s for the AFCS

What is the AFCS?

What is the format for the AFCS?

When and where are AFCS events taking place? 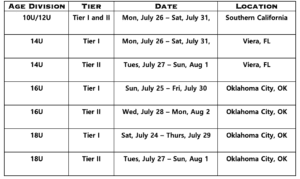 How does my team earn points in the SEFL?

Teams can earn points during the SEFL’s season by playing in League Events, where the points earned will determine the seeding for the SEFL Championship. To learn more about The Alliance’s tier and point system, click here.

Teams will also need to score their games through AthletesGoLive (AGL) to earn Alliance points. AGL provides reports about the event – what teams played each other, game scores, and stats. It is very important to score all games in AGL or they will not be included in leaderboard calculations.

How can my team qualify for the AFCS?

To qualify for the AFCS, your team must earn a Tier I or Tier II berth through your League Championship or AFCS Qualifying Events. Each season, teams will determine their Tier (I or II) based on their different game results. Teams earn points in their league season by playing in league events which are made up of existing events from various hosts including TCS, USA Softball, USSSA and unsanctioned events. Check out the SEFL’s Schedule of events to register your team for different opportunities to earn points.

How many berths are available for the SEFL?

Which teams from the SEFL have already qualified for the 2021 AFCS?

Good luck to all of the SEFL teams competing for a berth to the 2021 AFCS!!