Isabella Melley Recognized as the SEFL Player of the Month

Isabella Melley Recognized by SEFL for Her January Performance By: Caroline Helmer   The Southeastern Fastpitch League (SEFL) is excited to spotlight Isabella Melley in our Alliance Player Recognition Program as our January Player of the Month. For the remainder of the 2021 season, the SEFL will highlight Players of the Month from our different…

Isabella Melley Recognized by SEFL for Her January Performance 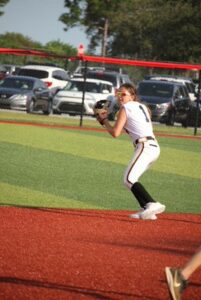 The Southeastern Fastpitch League (SEFL) is excited to spotlight Isabella Melley in our Alliance Player Recognition Program as our January Player of the Month. For the remainder of the 2021 season, the SEFL will highlight Players of the Month from our different age groups.

In our inaugural Fall season, Isabella Melley was a key asset to the success of the Tampa Mustangs – Viruet 14U team. Melley finished the year with impressive individual statistics and was able to earn the award as the MVP for the 2020 SEFL Fall Championships in the 14U division. She also helped her team earn an AFCS Tier I berth for the 14U Alliance Fastpitch Championship Series.

Isabella finished the year with a batting average of .394, and an on base percentage of .468, including 31 singles, 7 doubles, 2 triples and 3 homeruns.  Her singles quickly turned into doubles as she was also able to record 21 stolen bases this Fall. Isabella Melley is also a 2025 graduate who has not yet committed to playing in college.

“Isabella is an amazing young lady who has worked hard to be one of the top players in the 2025 class”, said Mustangs Head Coach Willie Viruet. “She has put in the work on the field, the weight room, and in the classroom and it is starting to pay off. Her leadership skills have helped our team become one of the best in the country at the 14U level. It has been such a pleasure coaching Isabella. Players like her make my job easy!”

“I played tennis from the age of three to seven and shortly after discovered the game of baseball. I played with the boys for a few years until I transitioned over to softball, and I’ve fallen in love with it ever since”, said Melley when we asked her how she got started in the game. “Coach Willie and his staff have been a big part in my development as a player and student. I am very fortunate to be a part of the Mustang-Viruet team, and to share my softball journey with such an incredibly talented group of players.”

When we asked Isabella what her favorite softball memory was, she responded with “Traveling to Puerto Rico in 2019 to play in a tournament there over the Thanksgiving holiday. It was a super fun experience that I got to share with some of my teammates and coaches. Something I will never forget!”

Congratulations to Isabella Melley from the 14U Tampa Mustangs-Viruet for being recognized as the January SEFL spotlight athlete!