By Caroline Helmer January 27, 2021 – The Southeastern Fastpitch League (SEFL) is excited to spotlight NiJaree Canady as our first athlete in our Alliance Player Recognition Program. For the remainder of the 2021 season, the SEFL will highlight Players of the Month from our different age groups.   In our inaugural Fall season, NiJaree…

January 27, 2021 – The Southeastern Fastpitch League (SEFL) is excited to spotlight NiJaree Canady as our first athlete in our Alliance Player Recognition Program. For the remainder of the 2021 season, the SEFL will highlight Players of the Month from our different age groups. 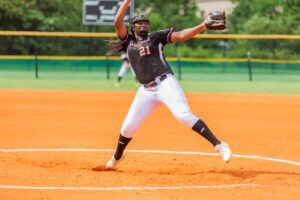 In our inaugural Fall season, NiJaree (Nija) Canady led the way for a Louisville Lady Sluggers team with impressive individual statistics and a dominant team to back her up on the mound. She led the Lady Sluggers to a SEFL Fall Championship and a berth to the Alliance Fastpitch Championship Series (AFCS).

Nija started 13 games in the circle and tallied up 93 innings pitched throughout the season. She finished the year with an Earned Run Average (ERA) of 1.43 and an impressive 148 strikeouts. Canady was dominant in the circle and at the plate for the Lady Sluggers with a batting average of .447 and an on-base percentage of .656, which included 17 hits and 3 homeruns.

“Nija is a truly special player”, said Lady Sluggers Head Coach. “She is a product of hard work, dedication, and a relentless pursuit of excellence. She is a great teammate that comes from a strong family who believes in all of these qualities and her on field accomplishments are a byproduct of that guidance. The Sluggers love Nija and we stand to applaud her for this honor.”

Nija Canady is a 2022 pitcher who has not yet committed to playing in college.

“When I was very young, I started off as a catcher playing baseball on a team with my brother and switched over to softball when I was about six years old. I continued catching until I was ten, then I took up pitching and kept with it ever since”, said Canady when we asked her how she got started in the game.

When we asked Nija what her favorite softball memory was she responded with “Playing in the TV game in Colorado my freshman year. I started off pitching and hit a homerun in the game. I remember the stands were packed and it felt like everyone was there watching our game.”

Congratulations to Nija Canady from the 18U Louisville Lady Sluggers for being recognized as the spotlight athlete for the SEFL this Fall.