Jadyn Dawson Recognized as TFL’s Player of the Month for March  By: Georgia Kasperowicz The Texas Fastpitch League (TFL) is excited to spotlight an athlete in our Alliance Player Recognition Program. Jadyn Dawson of Glory Adkins Gold 07 is the TFL’s March Player of the Month based on her league performances this past month. In… 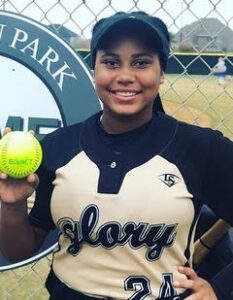 The Texas Fastpitch League (TFL) is excited to spotlight an athlete in our Alliance Player Recognition Program. Jadyn Dawson of Glory Adkins Gold 07 is the TFL’s March Player of the Month based on her league performances this past month.

The Murphy, Texas native posted an on-base percentage of .517 and a .731 slugging percentage. She had a fielding percentage of 96% on 52 total chances. Jadyn recorded an amazing .684 batting average with runners in scoring position. She led her team to 1st place, 2nd place and 7th place finishes in their three tournaments in March.

“I started playing softball because of my dad,” Jadyn recalls. “He started me in t-ball and was my very first coach. He introduced me to front toss for the first time.” Her favorite softball memory is hitting her first and second out-of-the-park home runs on the same day.

“Jadyn Dawson loves the game of softball and her positive, upbeat attitude is contagious for the entire team,” the Glory Adkins Gold coaching staff says. “Her work ethic and commitment to training this spring really paid off in both hitting and pitching. It doesn’t matter if we are working on running bases, outfield drills or hitting, she goes all out, all the time. Jadyn has great competitive at bats and is a clutch hitter, competing for her team and giving us the best chance to score runs. Her success is not an accident, she is a relentless competitor, resolves conflict and always wins contact.”

Congratulations to Jadyn Dawson from Glory Adkins Gold 07 for being recognized as the TFL’s Player of the Month for March. The Texas Fastpitch League will continue to recognize Players of the Month across all age divisions this season. To be eligible for a Player of the Month honor, teams must score their games with AGL so their stats can be recorded and pulled in our monthly reports.