Competitive Fastpitch - It's no secret that to get better, our teams need to play with and against the best players possible. Texas Fastpitch League is heavily supported by the top organizations in the state. For years teams have had to travel all over the United States to find competitive events. With TFL, these events are in our own backyard. With weekly games and a long list of local events, Texas Fastpitch League guarantees teams the ability to get better on a regualar basis without having to leave the region.

The Alliance Championship - Every year there is one event that is a true test of the best teams in the country where only 1 team claims victory and is crowned the #1 fastpitch team in the nation. Commonly referred to as a national championship, or nationals, there is always one event that the softball world considers being our "finals." The Alliance Championship is that event. The Alliance Championship event is composed of qualifiers from member leagues, like TFL, from all over the country. Every summer, those qualified teams have the honor to compete against each other for a shot at becoming the best of the best. The only way to be a part of this is by being a part of the Texas Fastpitch League. 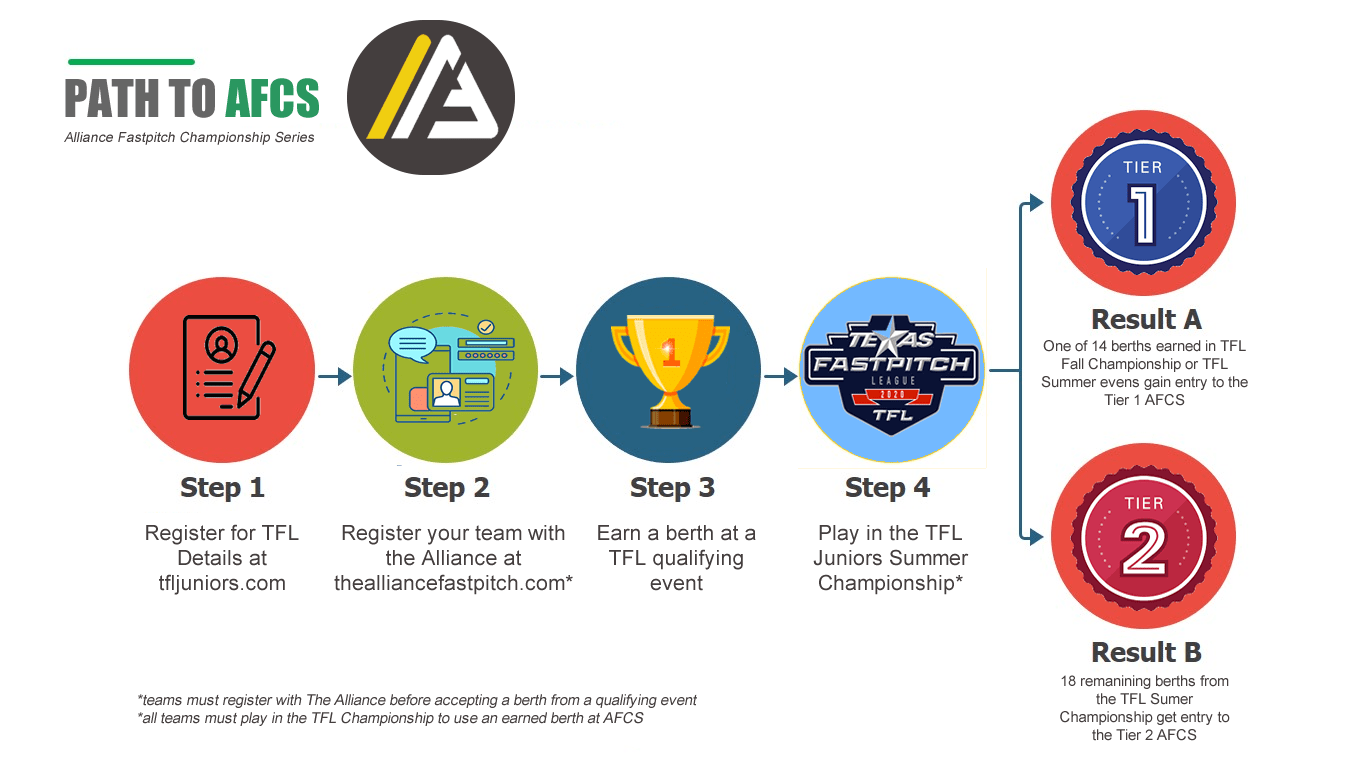 How much does it cost to register for TFL?

When is the deadline to register for TFL?

When I register for the TFL League is it good for the fall season or fall and Spring/Summer?

I just joined the TFL, how can i qualify for Tier 1?

Teams may qualify for Tier 1 AFCS by earning a berth at a TFL Junior event, or at Fall, Spring, or Summer Championships.

I already have Team insurance, do I need to purchase insurance with The Alliance?

No. If you're registering for The Alliance and already have insurance you can get a discounted registration by uploading your current insurance and using the checkout code: INS2020/21

If I paid for the TFL do i still need to be a member of the Alliance?

No. If you wish to play in The Alliance Championship Events however, you will need to be registered with them.

My team qualified for tier 1. How long does it last?

Congratulations on your Tier 1 status! You will be a Tier 1 team until the end of the season next August.

Do i have to be part of the TFL and Alliance to play in a Endorsed TFL event?

No. TFL endorsed events are just normal events that anyone can play in. Please note that your team will not earn berths from these events unless you're a registered TFL team and your team has registered with The Alliance.

How do I qualify for the 10u or 12u TFL Championships

I missed the TFL Fall or Spring Kickoff Event, can I still register for TFL and receive all the benifits of being a TFL juniors member?

Where do I register for the Texas Fastpitch League?

Where can I find a list of the TFL Juniors teams that are registered?

How can my team qualify for The Alliance National Championship

Teams that qualified in the fall are already qualified for The Alliance Championship. Other teams must earn berths given at qualifying TFL events. Click HERE to view our Path to AFCS.

Will rosters ever be frozen or locked?

Players can never play on two different teams in the same event. (Note: Fall & Spring kickoff events, although in different locations are considered the same event for rostering purposes.)
All transfer requests must be submitted by the parents of the athlete via email to Kevin Shelton (TFLLAInfo@gmail.com).