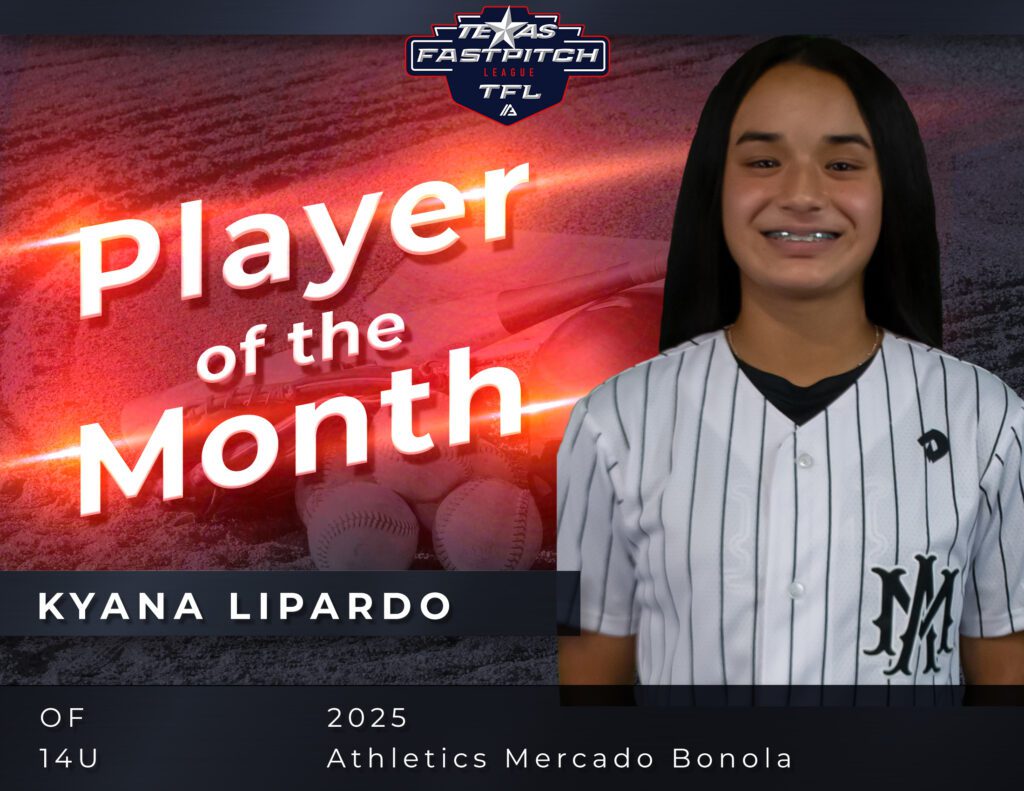 The Texas Fastpitch League (TFL) is excited to spotlight Kyana Lipardo as the October Junior player of the month. Lipardo is a 2025 on Athletics Mercado Bonola 14u.

This past October, the lefty slapper posted an impressive .632 batting average, .737 slugging percentage and 4 RBIs. She racked up 4 singles, 10 doubles and 2 triples

“Don’t let her size fool you, Kyana “Keke” Lipardo is a player to keep an eye on”, said coach Rebecca. “If I had to pick one word to describe Keke it would be “competitor”. She is a player that loves to win and hates to lose even more. With 57 at bats to date, she has only had 3 strikeouts and batted .632 for the month of October. She’s a slapper that puts the ball in play and uses her speed to create chaos, with a 2.72 home to first time, but she also isn’t afraid to get in there and swing away, a true triple threat. She’s a heads-up base runner and will take a base if she catches you sleeping. As a defensive player, she has great range in the outfield with a tremendous arm. Throwing 63 mph overhand allows for her ball to travel across the Diamond and throw runners out. Keke is only a 2025 and if she wants it, the sky is the limit for her.”

“I started off playing CYO baseball in Texas at the age of 3 and continued to play when we moved to North Carolina because my parents were in the military,” Keke said. “We moved back to Texas when I was 8 when my parents retired from the military. That was when I went to my first softball tryouts and played at a pony league for a year. Then, I tried out for a select team and played up with Rally 10u. I played up for the first year and moved back down to my grad year the following year. Rally transitioned into Blaze and I played with Blaze for 2 years. Later, our entire Texas Blaze team transitioned into Athletics Mercado-Texas and I’ve been playing with them going on my 3rd year now. I’ve been playing with most of the girls in my team since I was 9 and have pretty much the same coaching staff as well.”

Her favorite softball memory was during a round robin when they got rained out. “The field was filled with puddles and the girls went out and dove into all the puddles. We were soaked and some of the girls’ younger brothers even joined in and it turned out to be a fun and memorable softball game.”

From all of us at the Alliance and the TFL, congratulations to Kyana Lipardo for her achievements.