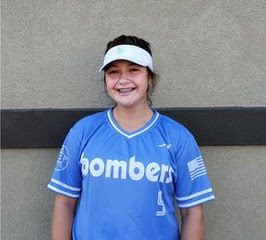 The Texas Fastpitch League (TFL) is excited to spotlight an athlete in our Alliance Player Recognition Program. Laila Nobles of Texas Bombers Gold 14U Malpass has been recognized as the TFL’s Player of the Month for April based on her league performances this past month.

This April, Nobles recorded 8 home runs, 11 doubles, and 20 singles. She contributed 35 RBIs for her team and led her team in home runs with 18 over the fall and spring seasons. She plays both first and third base for her team.

“Laila is a very athletic and powerful 2025,” says Coach Krista Malpass. “She’s got the power to leave the ball park every time she swings the bat. Her potential and dominance in the box is top level.”

When asking Laila’s favorite softball memory, she told us that Winning the Premier Girls Fastpitch (PGF) National Championship twice was something she would never forget! Congratulations to Laila Nobles from Texas Bombers Gold 14U Malpass for being recognized as the TFL’s Player of the Month for April!

The TFL will continue to recognize Players of the Month across all age divisions this season. To be eligible for a Player of the Month honor, teams must score their games with AGL so their stats can be recorded and pulled in our monthly reports.