Prolific Fastpitch- “One Time Like We Won the Whole Thing!”

Prolific Fastpitch- “One Time Like We Won the Whole Thing!” 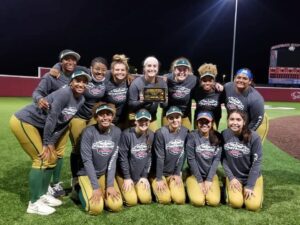 Prolific Fastpitch is headed by Coach Ray Vaughn, who founded the organization in the Fall of 2019. After leading some of the best teams in the Houston area, he decided to make his mark by establishing his own program with one 16U team based in Pearland, Texas. His goal is “to become an organization that is well respected for its culture and ability to develop players,” and he is well on his way to achieving it.

“Our coaches and players have all bought into the same mindset, and it centers around playing with an edge,” says Coach Vaughn on his team’s culture in their first TFL season. “We embrace being the ‘Little Guy’ and play with a chip on our shoulder. I am extremely proud of how the girls never waver in their belief of themselves or each other.”

Although Prolific Fastpitch is just over a year old, the team has made a name for itself. Fellow TFL coach David McCorkle took notice of Coach Vaughn’s program after facing off multiple times this past season.

“This team looked like they had been playing together for 5 years,” commented Coach McCorkle of the Bombers Fastpitch. “He has built an awesome culture within his team, and all his players and staff are all on the same page. Each game we played them was a fight and battle.”

D’Auna Jennings, a 2022 outfielder and Duke commit, had glowing praise for her coach and her time with Prolific. “He is fearless and refuses to let us be anything but the best we can be,” she says of Coach Vaughn. “He has the ability to develop and coach us intensely while at the same time showing unconditional love for us. Prolific is the definition of family.”

Coach Vaughn and his coaching staff instilled in their players three main ideas throughout their journey to the championship: 1) great effort, great attitude, and accountability, 2) play together and stay together, and 3) mental toughness overcomes adversity.

Prolific Fastpitch looks to continue its success from the fall by expanding the program. Coach Vaughn will be adding an 18U team to the organization for the upcoming Summer season, and the team will be competing at the Gold level.

“My goal was to make sure that we had a team that was good enough to be in the mix with the big boys and then consider growing,” continues Coach Vaughn. “The addition of our 18U team this Summer reflects what the girls on our 16U team have made possible through their hard work and dedication. All these girls could have played somewhere else, but they believed in Prolific, and I love and appreciate them for it.”

Prolific Fastpitch turned quite a few heads during their run to the TFL Championship, and the team looks forward to what is next. On the upcoming Championship Series this Summer, Coach Vaughn says, “We are extremely excited about the opportunity to compete against the level of competition that will be represented at the 2021 AFCS. There is nothing more fun than getting to measure up and compete with the best.”