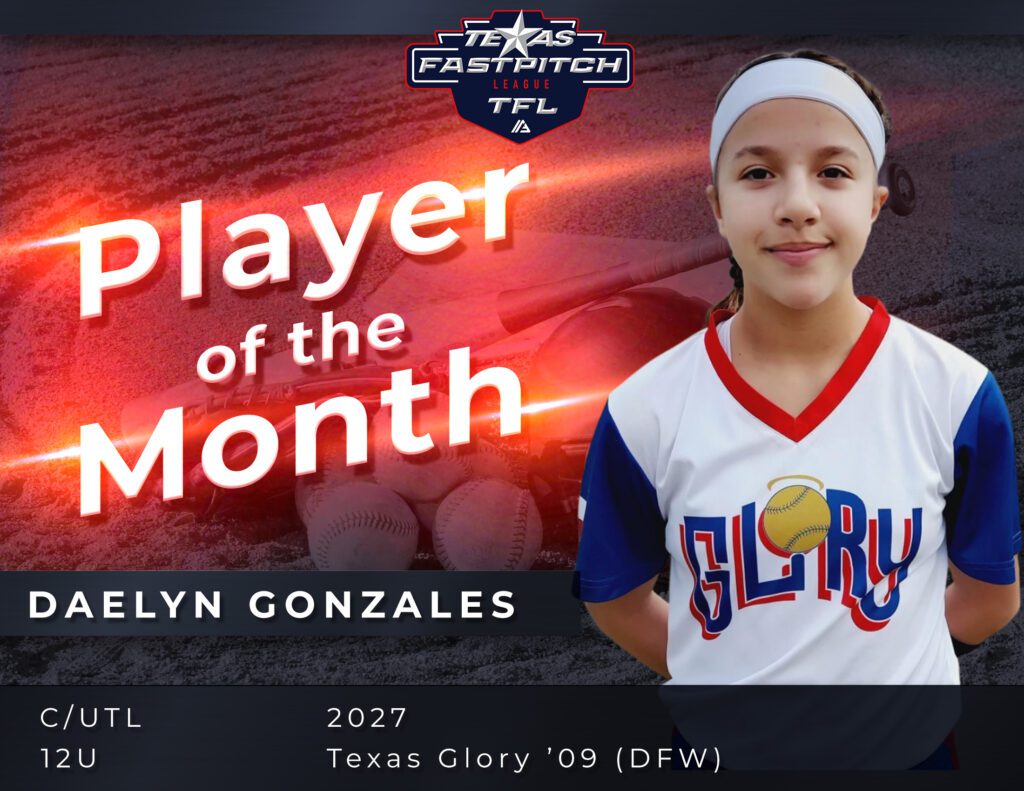 The Texas Fastpitch League (TFL) is excited to spotlight Daelyn Gonzales as the Junior September player of the month. Gonzales is a catcher/utility on Texas Glory ’09 (DFW).

During the TFL stage 1 tournament, Gonzales boasted an impressive .588 batting average and went 10 for 17 with 3 RBIs. In addition, the 2027 had 6 runs scored.

“Daelyn is a natural born leader and impacts the game defensively, at the plate and on the bases,” coach Chad Mosley said. She is a catcher/utility and is a vocal leader on the field. She hits the ball with power to both gaps and puts pressure on. The opposing team with her speed and athleticism. Daelyn gives 110% on the field and in the classroom, and a s a 12u player is like having another coach on the field.”

Daelyn’s softball journey began when she was inspired by watching her older sister play. “I really loved the intensity and competitiveness of the game and I knew this was the perfect sport for me,” she said. “While playing 10U softball my team didn’t have a player to play the catcher position and the coaches felt I was the most aggressive one to give the chance at it. That’s when I fell in love with being behind the plate because it allows me to bring out my intensity and help lead. Every game for me is a new chance to have a better understanding of teamwork and leadership. I enjoy travel softball because it challenges me to be the best by playing with and against the best. I have found my softball home with Coach Mosley and Texas Glory 09 DFW. My favorite thing to do is bring the energy to our team when we all make great plays.”

Daelyn has many fond softball memories. “My favorite softball memory is when we played in the Ronald McDonald tournament in the fall of 2020. We were playing a team in the Hotshots organization with the game tied 2-2. It was the bottom of the last inning with the bases loaded and zero outs. We played for the force at home. The first out came from second to home. The Second out came from SS to home. The final out came from a grounder to first. Our team kept them from scoring and our fans were going crazy in the stands from excitement about the stop we just made from the position we were in. We went on to tie and even though it wasn’t a win, our teams’ execution of those plays will always be one of my best memories and a moment I will always be proud for our team.”

From all of us at the Alliance and the TFL, congratulations to Daelyn Gonzales for her achievements.