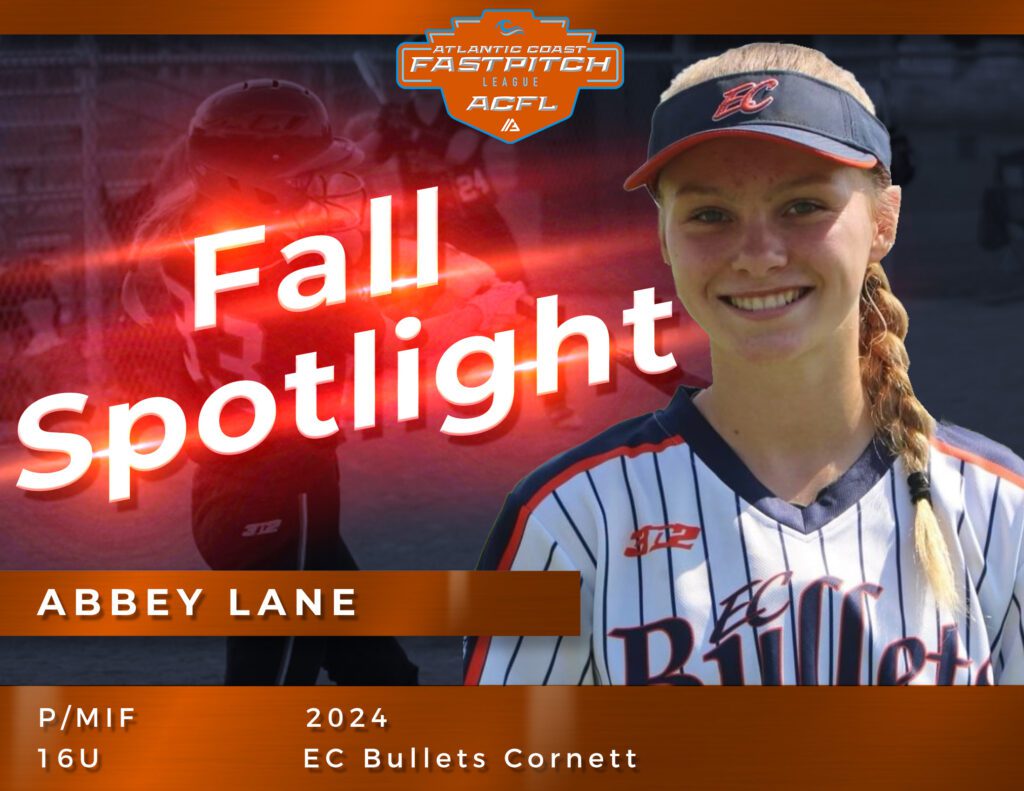 The Atlantic Coast Fastpitch League (ACFL) is proud to name Abbey Lane the 16U ACFL Fall Spotlight Athlete for 2021. Lane is a member of EC Bullets-Cornett and despite a shortened fall season the Round Hill, VA native posted eye-popping numbers on both sides of the ball:

Q: Tell us a little bit about you and your softball story?
A: I started playing t-ball when I was 5 years old and fell in love with the game. I knew I would grow up playing softball. I started pitching when I was 8. I was told over and over again I pitched well for my size and I needed to get stronger. It motivated me. It made me more determined and focused on my goal to play in college. I am excited to continue playing and to see what the future holds.

Q: What is your favorite softball memory?
A: There are many softball memories that have stuck with me. My top 3 would have to be my first freshman varsity softball win when I was pitching in a tight game. Another one was helping my travel team win Pony Nationals in 10u and 12u pitching multiple games on championship day. The last one was hitting a home run and pitching in the 18U USA VA State Championship helping my team to a win.

“Prior to Abbey’s injury this fall she was absolutely dominating in every aspect of the game. Now cleared and back to putting in the work that made her the unassuming, often slept-on, superstar that she is, expect to see her back to her dominating ways in high school and this summer on the travel ball scene. I’ve watched Abbey play since she was 9 years old and was always impressed by her but never realized how incredibly special she actually is until I got the opportunity to call pitches for her when she joined our team this fall. She just does not miss her spots…ever. On top of how great of a player Abbey is, she is also an amazing teammate. Joining an already established team this fall, Abbey took no time to earn her teammates’ trust and respect. She fits in like she’s been with them since the team was formed. Abbey is also almost too tough for her own good. She just loves the game and wants to be on the field all the time, even when she probably shouldn’t, but that toughness/stubbornness is just another attribute that makes you love her more. Although she’s only been on the team for a short time, I can’t imagine coaching a team without her on it.” – Head Coach, Steven Cornett