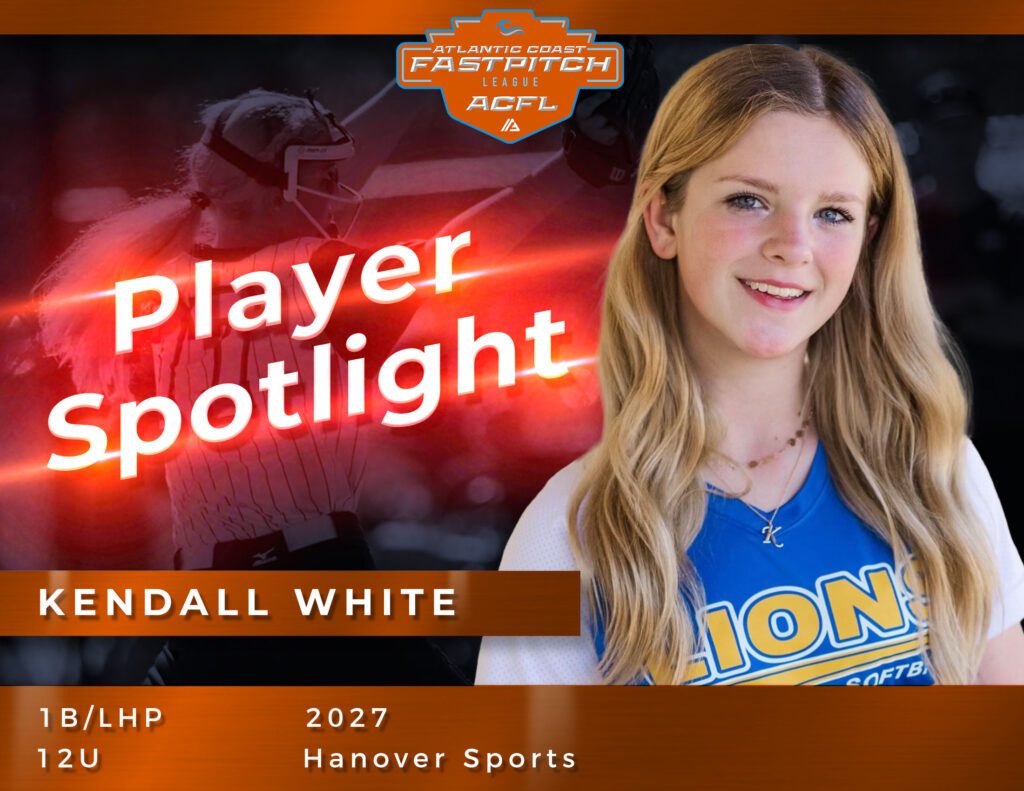 The Atlantic Coast Fastpitch League (ACFL) is excited to spotlight Kendall White as the March Spotlight Athlete of the Month. White is a 2027 1st baseman and left-handed pitcher on Hanover Sports 2027 Smithson. The 2027 attends New Kent School and hails from Providence Forge, VA.

“Kendall works hard outside of practice to improve her game,” said coach Chip White. “She is not afraid to step outside of her comfort zone and try new challenges. When the team needed someone to step up a few years back and become a pitcher, she took the challenge on. She is reliable, she wants to win and is willing to put in the work to accomplish both her personal and team goals. It is hard having your father as a Coach, but Kendall does a great job of flipping the Dad/Coach relationship switch when she steps between the lines, or when we are working on hitting/pitching outside of team practices. She is also blessed to have great teammates and David Smithson’s leadership as her Head Coach to provide balance!”

Kendall White’s softball story:
I started playing rec-league softball at 4 years old. I began playing travel ball at 7 years old on a 10u Travel Team here in New Kent, VA, and switched to Hanover Sports for final year of 10u where I have been through my two years of 12u ball. I started pitching my final year of 10u due to team needs, I currently pitch for my New Kent Middle School team.

I was invited to participate in the USSSA Select 30 National Training Camp at the Space Coast Complex in Melbourne, Florida in January. Having not previously participated in any National events, I was not sure what to expect but was excited to see how my skills compared to some of the top players in the Nation at my age group. It was an amazing experience and I was able to rank in the top-10 of several events in the athletic testing portion, bat .375 during my games, and have a great time with my teammates! Meeting Lauren Chamberlain and Jailyn Ford were certainly highlights as well.

Kendall White’s favorite softball memory:
We were playing in the Babe Ruth State Tournament when I was 7 years old. My dad helped coach my older sister’s All-Star team, so he did not get to see many of my games that tournament. We were in a tight game that would send the winner to the State Championship Game, my dad hustled up to the field we were playing on after my sister’s game was over. As soon as he got there it was my turn to bat. I smashed the ball to left field and took off running! As I was rounding third base, I fell down, got back up, and beat the throw to the plate for my first ever home run, I ran off the field and jumped on Dad who was waiting beside the dugout! It was one of those special moments that sports gives us, I won’t forget that one!

From all of us at the Alliance and the ACFL, congratulations to Kendall White for her achievements.