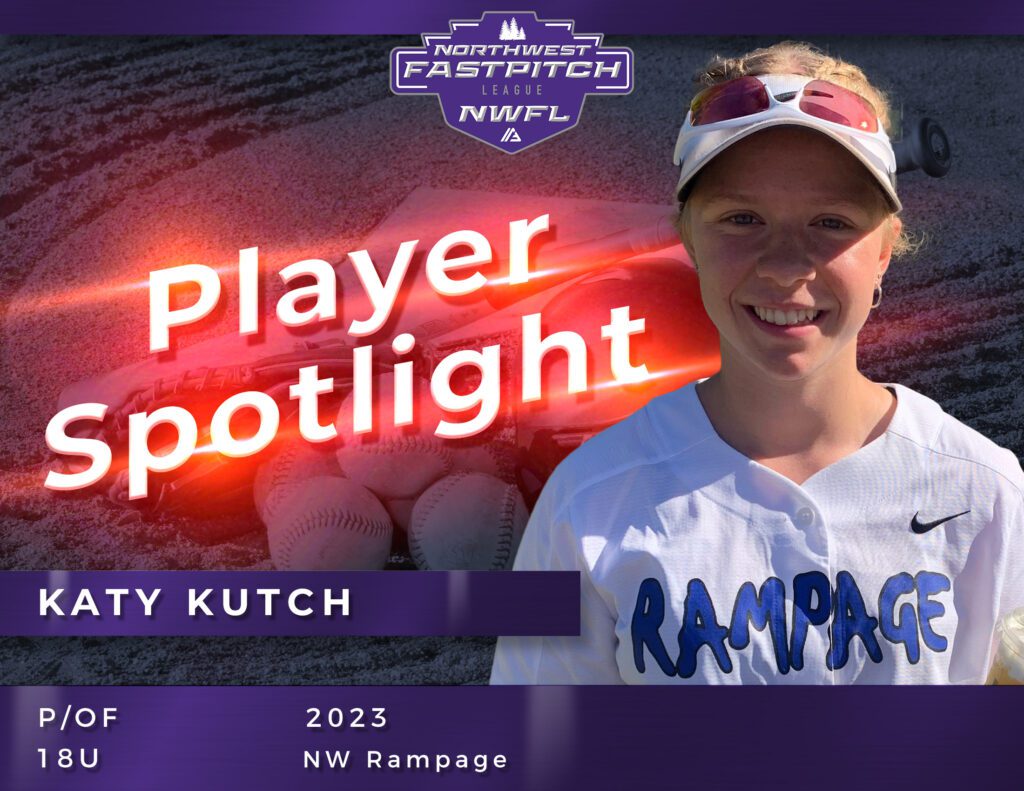 The Alliance Fastpitch and the Northwest Fastpitch League (NWFL) are pleased to announce Katy Kutch as the NWFL February Spotlight Athlete. Kutch is a 2023 pitcher and outfielder on NW Rampage.

Stats: During the month of February Kutch posted an impressive .750 batting average with a 1.903 OPS and 5 RBIs.

Softball Story (How did you get started?) – Tell us about you:
“I grew up on the bleachers watching my brother play baseball,” said Kutch. “I was raised in a baseball atmosphere, the field felt like home. Fly balls, grounders and home runs were never foreign to me. I started playing t-ball as soon as I could and my softball journey began. From tee ball I moved on to coach pitch, followed by little league games until I moved to club in 12U. Since then, softball has become an even bigger part of my life. These years have brought me to many different places, traveling all over the country to play. I’ve got to travel with friends I hope to keep for a lifetime. Growing up on those cold bleachers was a gift, introducing me to a sport I hope to stay involved in for a lifetime.

Favorite Softball memory:
“Softball has been a part of my life for so long it’s hard to break apart all the good times and find one that stands out among the others. There have been some great games played. Championship games with comeback wins and international tiebreakers where a triple hit by me saved the game. However, when considering my favorite softball memory, I see the times spent with teammates on and off the field. Meeting and spending everyday with friends during high school season I got to play the game I love while also creating lifelong friendships. Traveling with my team to California, Las Vegas and all over gave us an experience to bond and create memories that would not have been possible without softball. I’m thankful for this sport for not only giving me an outlet but also experiences I’ll remember forever.”

Coaches feedback:
“Katy is one of those players that is a joy to have on a team,” said coach Tim Searight. “She is extremely coachable, self-motivated and willing to put in the hard work to improve.  All she needs is to be given a direction or a task and you can trust she will take the bulls by the horns and get it done. She is a great teammate, who is fun to be around but also brings expectations of her team and herself to compete every game. She has had a number of clutch hits in her career, including a couple of key ones in our last qualifier.”