Lauren Stucky named RMFL Co-Player of the Month for April 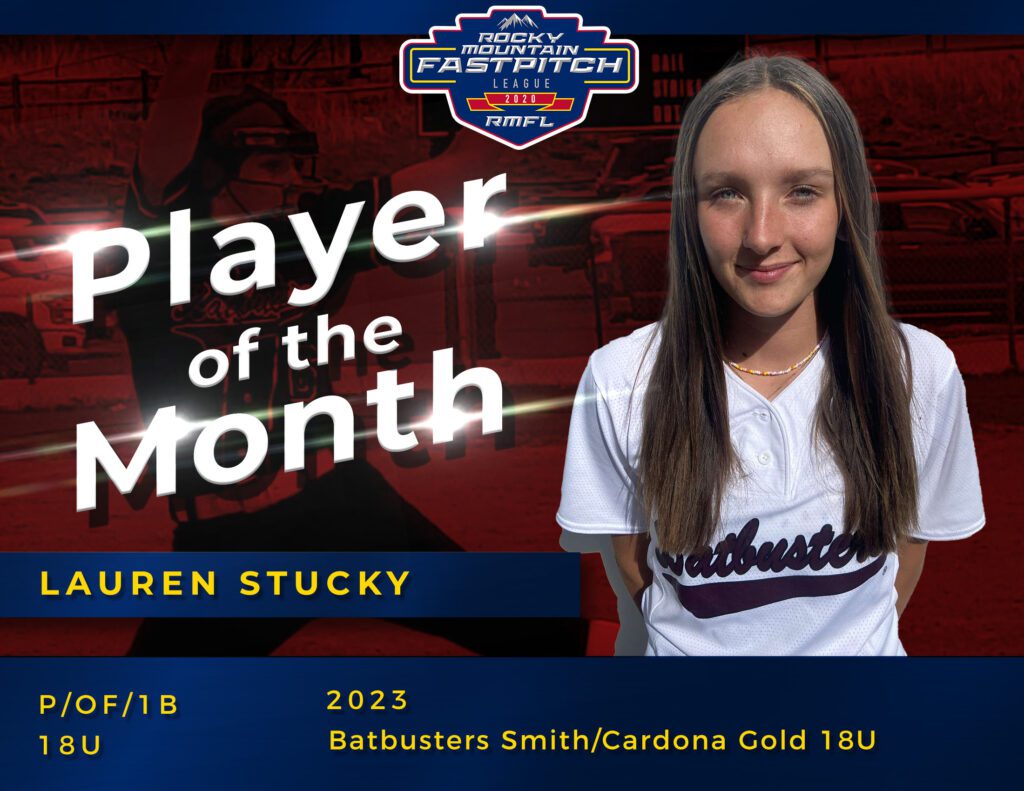 The Rocky Mountain Fastpitch League (RMFL) is excited to spotlight Lauren Stucky as April’s Co-Senior Player of the Month. Stucky is a pitcher, 1st baseman, and outfielder for the Batbusters Smith/Cardona Gold 18u. The 2023 plans to attend Colorado State University upon graduation.

“Lauren is a dynamic player both at the plate and in the circle,” said head coach Joe Smith. “As a hitter, she does damage to all fields and the ball just jumps off her bat. She has been in the top 3 in every offensive category for us this year. In the circle, “Lo” commands 4 pitches and has pinpoint control with a nasty changeup that hitters can’t pick up. Lauren is a great player and an even better kid. She is an absolute joy to coach.”

Lauren Stucky’s Softball Story:
“I started playing softball when I was about 6. I started out playing on a little league team for the first two years of my softball career. I always looked up to my older sister playing on the diamond every weekend. Watching her dedication and skills encouraged me to move on to travel teams and start my pitching journey. Since then, I have played on two teams and the coaches and players have changed my softball career for the better. I currently play for Batbusters Smith/Cardona where I have been able to progress in my skills and talk to college coaches. For the month of April, I achieved a .467 batting average and a .600 OBP. I pitched 30 of our innings, facing 148 batters while striking out 16 and only walking 3. In February of 2022, I made a decision to take a visit to the campus of Colorado State University and ended up giving a verbal commitment. I dedicate this achievement to my comp ball coach along with my high school coach for helping me get that opportunity to get in touch with the coach. Softball has made a big impact on my life on and off the field. It’s created unbreakable bonds and a lifetime worth of memories.”

Lauren Stucky’s favorite softball memory:
“My favorite softball memory I have created so far is winning regionals with my high school team, Ponderosa. We were always known as the underdogs in the county so to fight our way up to the top and make it to state was beyond an adrenaline rush. It was a close game, but with the fight and endurance our team put out on the field that day, we were able to pull through and score the 2 insurance runs we needed in the 6th inning. We couldn’t have made it there without a team that always has each other’s backs.”

From all of us at the Alliance and the RMFL, congratulations to Lauren Stucky for her achievements.