Finlee Williams named TFL Player of the Month for April 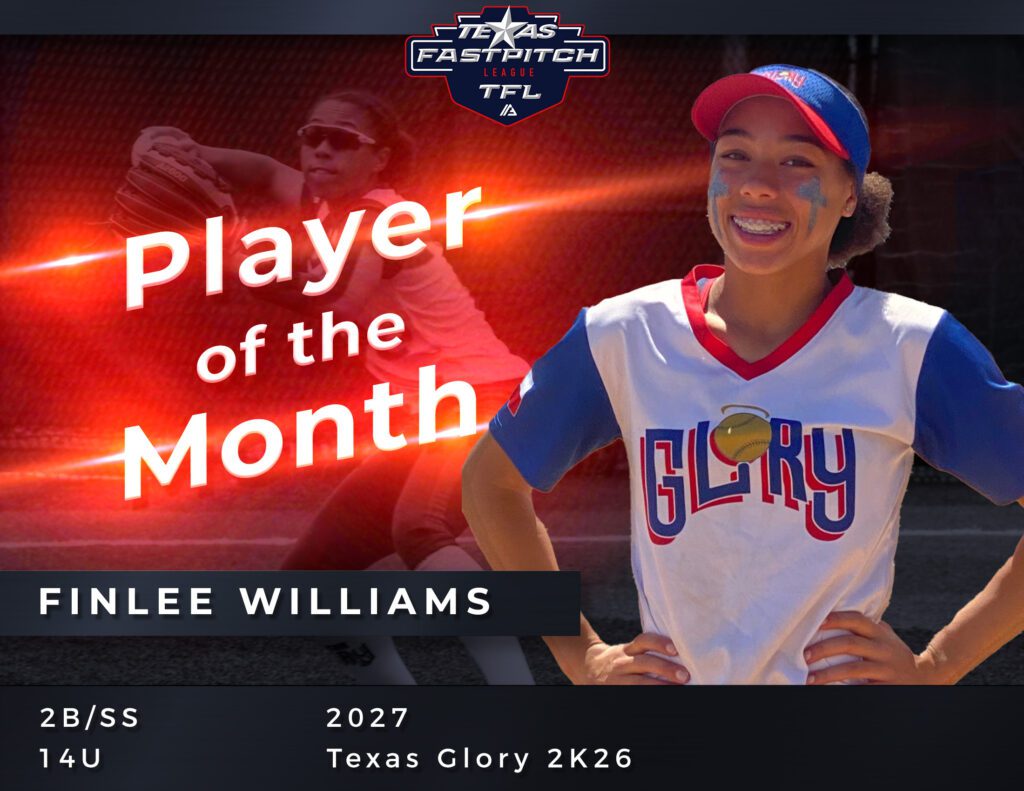 The Texas Fastpitch League (TFL) is excited to spotlight Finlee Williams as April’s Senior Player of the Month. Foster is a centerfielder, 2st baseman, and SS for Texas Glory 2k26.

Finlee Williams’ softball story:
“I have been around ball my whole life, I watched my aunt play in college and spent a lot of time at my brother’s baseball games, so I wanted to be out there too. As early as I can remember, I was always throwing a ball around and hitting off a tee in the backyard.  I started playing baseball when I was 4, and then started softball when I turned 7. I joined Texas Glory when I was 9 and have loved every minute of being in this organization. My mom played college softball at Texas Tech so she always made sure I was doing the right things, now I have a lot of coaches that help me become better every day! Thank you, Coach Mo, Coach Kevin, Coach Ced, Coach RJ, and Coach Jeff.”

Finlee Williams’ favorite softball memory:
“I love being on the field with my teammates. They are my family, so getting to compete with them, traveling to fun places and staying in hotels, and hanging with them on and off the field is super fun. My teammate Kennedy and I have always been on the same team, so always getting to move teams together and always having her there with me has made her more of a sister than a teammate, most of my softball memories include her too.

I also really love any double play: strike ‘em out, throw ‘em out plays are my favorite!”

“Finlee is a 5-tool athlete with the ability to smash balls over the fence and beat out infield hits,” Coach Mariah Haygood said. “She has a deadly combination of leverage, power, and lightning-quick bat speed that make her extremely difficult to pitch to as well as a work ethic to match!!

Finlee’s speed, high contact percentage, and on base percentage makes her a mainstay at the top of the Texas Glory 2k26 lineup,” said Coach RJ Howerton and Coach Meiser. “She has the power of a cleanup hitter as she leads her team in home runs this season. Her simple, yet powerful swing gives her the ability to adjust to many different styles of pitching and maintain a consistently high batting average. Finlee is a selfless team-first player who can place the ball wherever she needs to, when asked to bunt.

Defensively Finlee is typically the starting center fielder but will transition into middle infield as needed. She plays loose in the outfield, but aggressively attacks the ball, making excellent reads on any ball hit her way. Don’t let the occasional dancing and celebrating in the outfield fool you, she has a loose style of play that gives her an edge!”

From all of us at the Alliance and the TFL, congratulations to Finlee Williams for her achievements!