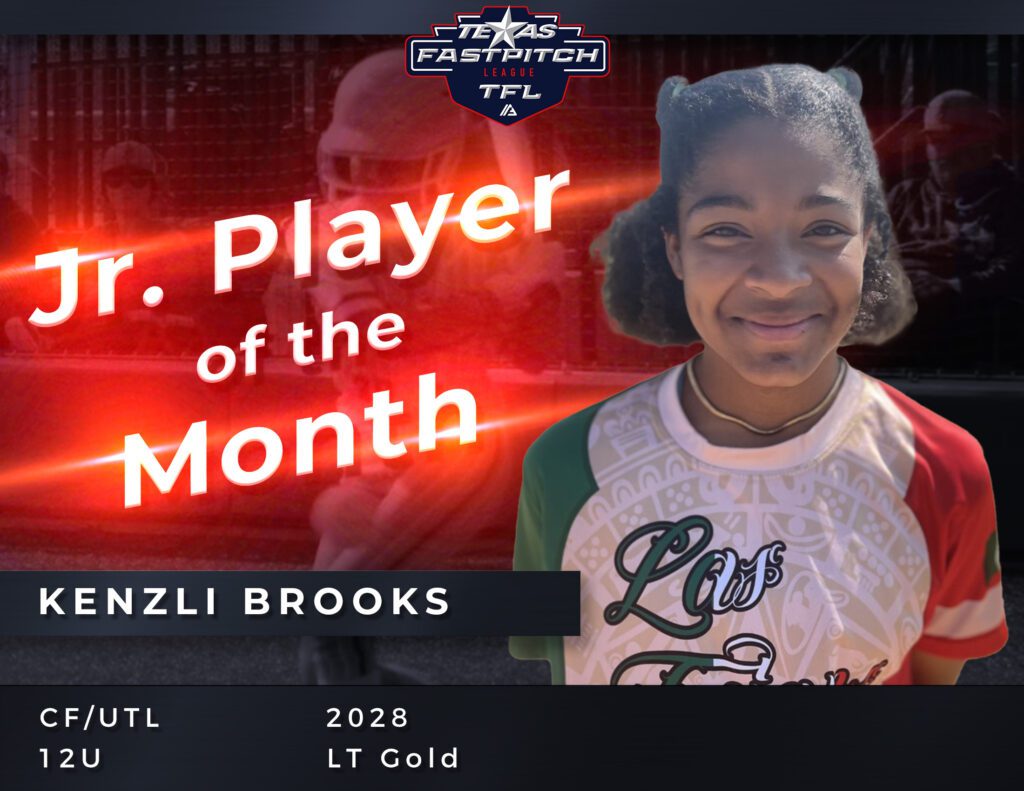 The Texas Fastpitch League (TFL) is excited to spotlight Kenzli Brooks as April’s Junior Player of the Month. Brooks is a Centerfielder and Utility player for LT Gold.

“Kenzli has become one of my leaders on the field, she knows how to have fun and pump her teammates up!” said coach Bri Walker. “Kenzli’s game IQ defensively, at the plate and on the bases is very high … she definitely causes CHOAS with her speed. She is a player who can literally play every single position on the field and will do it with a smile on her face!!! She is a vocal leader on the field. She hits the ball with power to both gaps and puts pressure on she uses her slapping and short game and speed most of the time. The opposing team gets rattled with her speed and athleticism. Kenzli gives 110% on the field and in the classroom. Kenzli loves hard and definitely will carry the team on her back and lift them up and will make sure each girl keeps a smile on their face!!!”

I got started when I was 4 years old playing 8u league softball in Grand Prairie Texas,” Brooks said. “I then started playing select at age 5 with who we called dirt angels we played 8u machine pitch! I then started playing with the lady Trojans all the way up until now !!! My aunt Coach Bri Walker has always been my coach since I started! If it wasn’t for her I wouldn’t be where I am today!”

“I don’t have 1 specific memory I just love playing the game and I just love being able to be around softball and my teammates and meeting other softball players at the fields making friends and having fun!”

From all of us at the Alliance and the TFL, congratulations to Kenzli Brooks for her achievements.