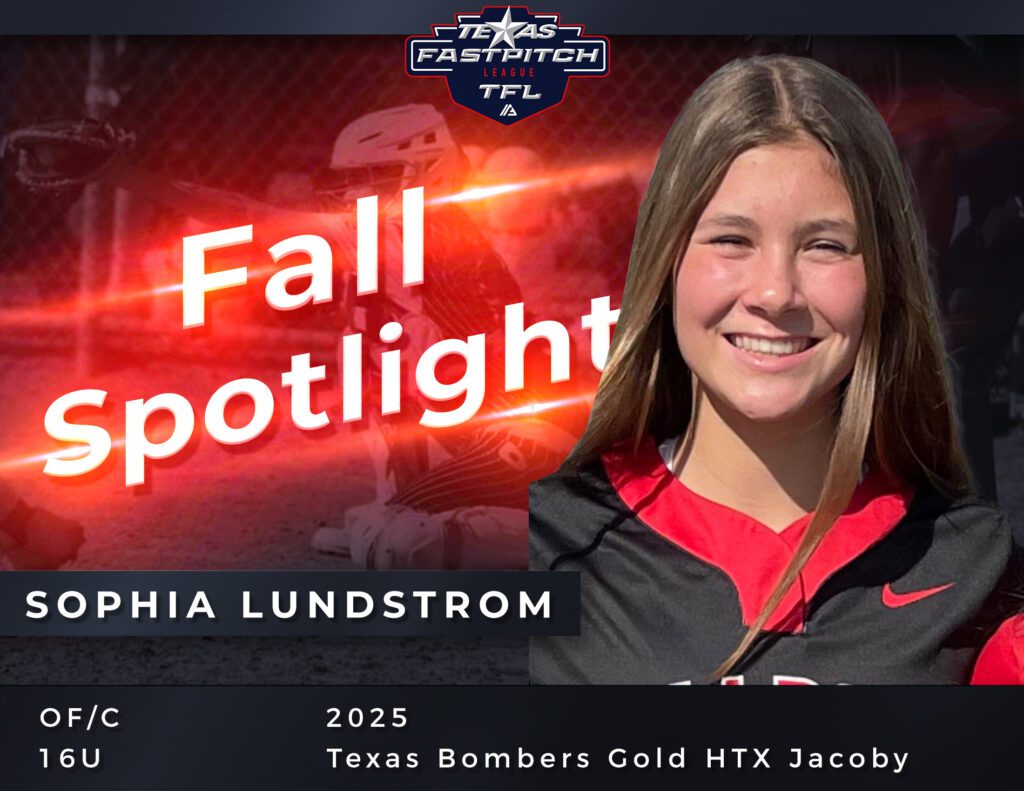 The Texas Fastpitch League (TFL) is proud to name Sophia Lundstrom the TFL’s 16U Fall Spotlight Athlete for 2021.

Q: Tell us a little bit about you and your softball story?
A: I started playing softball when I was 7 years old. When it was my turn to hit at that first league ball tryout, I stood directly on the plate and was completely clueless. After my first league season I didn’t play for a while, until one day my mom heard me chanting softball cheers to myself in the living room, and asked if I wanted to join again. I did another season of league ball and made All-Stars and loved it. By the first season of 10U I was playing select and taking catching and batting lessons! I was hooked on the competition and traveling and playing against people from all over! In the second year of 10u I joined Aces Express Lake Jackson, coached by Aimee Church. She suggested I become a lefty slapper. When my dad first told me the idea, I was not excited, so it took some convincing. Soon I bought in and was hitting left hand full-time and worked my way from the bottom of the line-up to lead off with my drag bunting and slapping skills. That year we won a lot! We ended at nationals in Panama City, Florida, and came home with the ring! That team switched organizations and we had a great first year of 12U. The second year of 12u, I found the team I am on now. With Coach Kelli Jacoby, I have grown and learned so much! I feel like she cares about me and I owe a lot of my success to her. Softball has showed me how to embrace new challenges, work together, be a leader, and compete! I would not want to be doing anything else.

Q: What is your favorite softball memory?
A: My favorite softball memory is the game that got my team to the last day of competition in Colorado, in the 2021 Sparkler. We had already played three games that day, and it was win or go home, so we fought. In that game, I was playing catcher, and the other team’s coaches were working hard at picking our signs, so we switched them up mid-game. Everyone on my team was hitting, our pitcher was hitting her spots, and the field had her back the whole time. Our energy was the best it had ever been! The game started off close, but ended with a big win. Our coach told us to go back to our hotels and sleep with our bats next to us, so that “they don’t get cold”! We did and made it to the finals the next day! I have had many great games, even more significant than that one, but if I could relive any game it would be that one, because of the energy of my teammates and how much fun everyone had working and playing together!

Sophia is one of the most tenacious players I’ve seen with a competitive spirit unmatched.  She’s always working to get better and if there is something she wants there is no doubt she will work hard to get it.  Behind the plate she loves for runners to challenge her and attempt to steal on her – she loves throwing them out.  She  commands the entire field from behind the plate.  Sophia is not your typical catcher and her speed helps her lock down her position and keeps runners from not only scoring but off the base paths.   Her throwing speed is 63 mph and it continues to get faster. When she is in the outfield she is robbing people of base hits.  She will play anywhere on the field you ask her to and does so fearlessly.  At the plate is she a hard out to get,  and is a triple threat.  When she gets on, be prepared for her to score.  Sophia is a true ultimate team player and is an absolute joy to not only coach but just know personally. Sophia continues to perfect her craft and thrives on competition,  to grow as not only a player but person.  Don’t tell her she can’t – she’ll just say,  oh yeah just watch me!  Sophia Lundstrom will be a name to look for and since she is  just a freshman GREAT things are ahead for her both on and off that field!  You  can’t coach her passion – it comes from within.