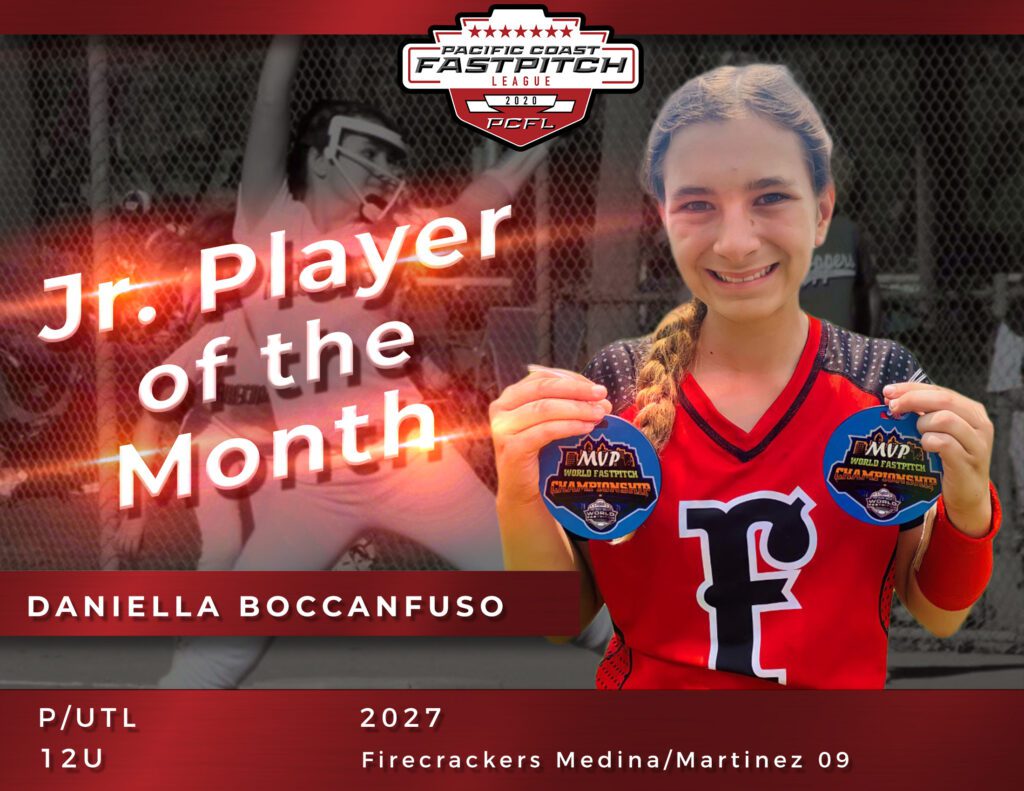 The Pacific Coast Fastpitch League (PCFL) is excited to spotlight Daniella Boccanfuso as the March Co-Junior Player of the Month. Boccanfuso is a pitcher and utility player on Firecrackers Medina/Martinez 09.

During the month of March, Boccanfuso cleaned up at the plate and in the circle.  The 2027 boasted an impressive .524 batting average, .714 slugging percentage and a 1.329 OPS. Boccanfuso tallied 9 singles, a double and 1 home run for a total of 11 RBIs. On the base path Boccanfuso successfully swiped 5 stolen bases. In the circle she boasted a .81 ERA and went 3-0 for the Firecrackers.

“Daniella or “D” as we call her on our team is an absolute pleasure to coach,” said head coach Jesse Martinez. “She may be short in stature but she’s a giant in her mind and she plays big! She’s the ultimate competitor and is always up for any challenge. I know that with her on the mound she’s always going to keep us in the game. What sets her apart is all the intangibles, her heart, desire, determination and her will to win. Her mindset and her softball IQ are off the charts for her age. When she’s not pitching, she’s playing 2nd base and is my number two batter in the line-up and can straight out hit!”

Boccanfuso’s softball journey began when she was just 4 years old, falling in love with the sport of softball. “In the spring of 207 when my team really needed a pitcher I stepped up and from that moment on I was in love with it,” she said. “In the summer of 2017 I made the All-Star team and couldn’t be prouder of myself. Summer of 2019, I made the All-Star team again and we went undefeated in districts and states. It was such an honor to lead my team into that. From that point on, I haven’t stopped pitching for practicing. I think that having the coaches that I have and my recent coaches really made me become the player I am today. Rec ball taught me a lot and helped me build the confidence that I needed to get to be the player I am today.”

“There have been so many great softball memories, but I would have to say my favorite softball memory is when we went into a 9-inning international tie break game,” she explained. “I was in the circle that game and threw 8 perfect innings. It was the bottom of the 9th with 2 outs when I gave up my first hit of the game. I loved the fight and battle that we had throughout that game. The intensity was high and everyone just kept battling. I would say this was my favorite softball memory because I was in control in that game. I stepped up for my team and took charge. We ended up winning 1-0 to put us in the semifinals!”

From all of us at the Alliance and the PCFL, congratulations to Daniella Boccanfuso for her achievements.