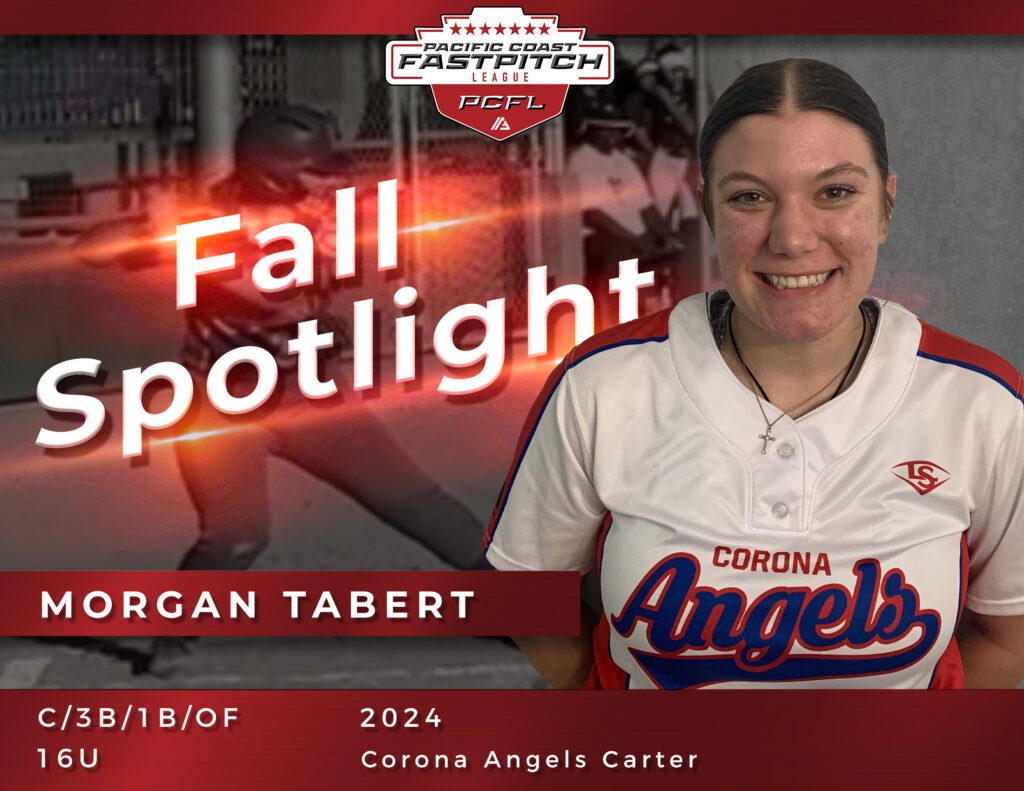 The Pacific Coast Fastpitch League (PCFL) is proud to name Morgan Tabert the PCFL’s 16U Fall Spotlight Athlete for 2021.

Hailing from Rancho Cucamonga, CA, Tabert made waves for her Corona Angels Carter squad. The 2024 graduate finished among the top ten in batting average in three out of the four Alliance events the Corona Angels attended, hitting .571, .582, and .727 respectively. She is also said to have “upped her power game by hitting multiple home runs and 6+ extra-base hits.”

Q: Tell us a little bit about you and your softball story?
A: I started playing rec softball at age 8 for Rancho Cucamonga Ace. I immediately fell in love with the game and especially loved the friendships I built. My favorite thing about softball when I started was the dugout cheers and hitting. I played rec ball for a few seasons until I tried out for travel at 12 u. Playing at that level of competition strengthened my love for the game, and I knew then what my goal was, and still is to play college softball. As a member of the Corona Angels I have played against some of the top competition in the country which has helped me get closer to my goal.

Q: What is your favorite softball memory?
A: I have so many favorite softball memories. One being my cousins came out to watch me play in a tournament at Rosetta Canyon in Elsinore Ca. They had just sat down in the stands when I got up to bat and hit a HR. My cousins and Aunt all got it on video and were super loud cheering for me. My favorite memory though was just recently we played in a On Deck Tournament and we were missing 2 of our starting pitchers for the tournament. We didn’t have the best first 2 games to start. We came back in the last game and battled our way to a win. We all had one goal in mind: to win that game. We were ahead and the other team began to fight back, but we never gave up hope. We ended up winning that game 12-3 or something but it wasn’t just the win it was that my teammates and I never gave up, even when we were not having the best of tournaments. That’s why I love softball the fight and the competitiveness.

Morgan has played within the Corona Angels organization for the past 4 years, and has spent the past 3, playing with Corona Angels Carter. Morgan is a great young lady, who is a good student athlete and a natural leader. In fact, her affinity to lead others has led her to serve as a team captain for the past 3 seasons. Morgan not only impresses with her strong leadership skills but her high softball IQ. Her knowledge and love of the game have made it clear that she would make a wonderful coach or trainer one day. Morgan is a team player and has really blossomed this past year often helping to mentor her younger teammates. Morgan’s growth not only happened in the dugout but on the field as she expanded her game and showcased her athleticism by moving to the corners and outfield when she is not catching.  Morgan has been working hard on her offensive game and it has paid off! This fall Morgan finished among the top ten in batting average in three out of the four Alliance events we attended, hitting .571, .582, and .727 respectively. She’s also upped her power game by hitting multiple homeruns and 6+ extra base hits.

Morgan has embodied our Corona Angels hitting philosophy, “Every great hitter gets to the hitting position” and “Pitch selection is the key to your hitting success.”  Great job Morgan Tabert for an awesome 2021 fall season. – Coach Ondra Carter