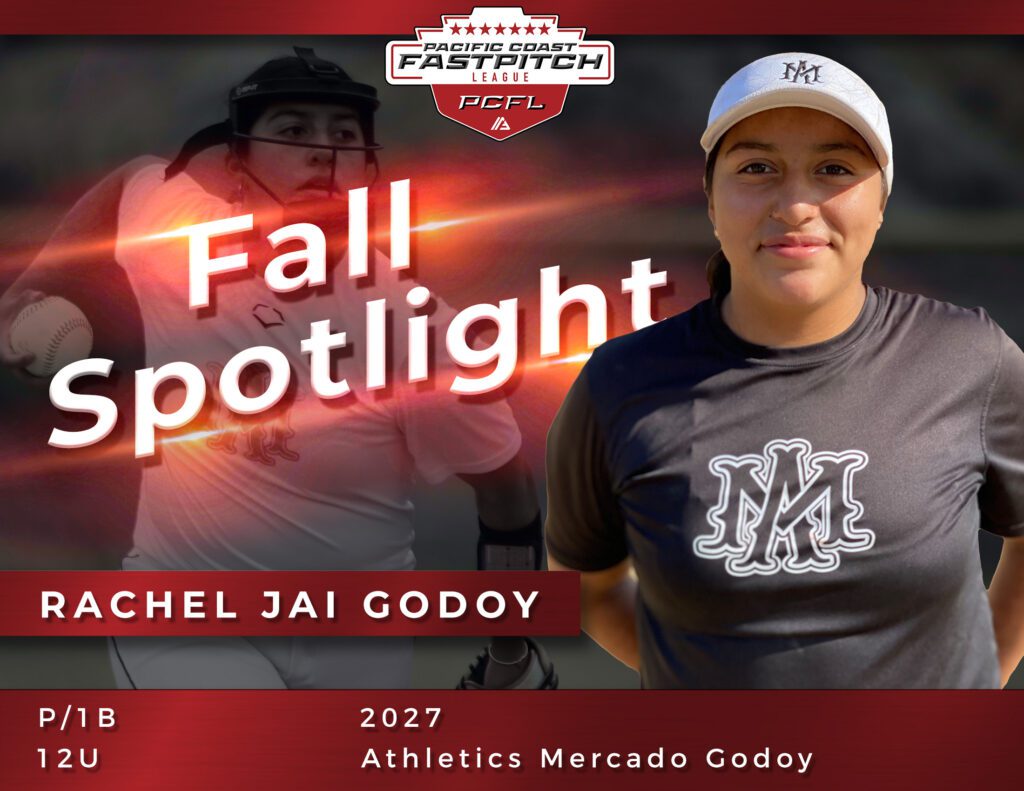 The Pacific Coast Fastpitch League (PCFL) is proud to name Rachel Jai Godoy the PCFL’s 12U Fall Spotlight Athlete for 2021.

She competes for Athletics Mercado Godoy and will graduate in 2027.

Q: Tell us a little bit about you and your softball story?
A: I first hit off a tee when I was 1 year old. I was the one who always asked my dad to go hit with me. Before I even got registered for my first season, I was already taking grounders, throwing, and hitting. It definitely didn’t look how it looks now, and I can remember saying to myself, “step and throw” as I played with my dad.

My first official season started when I was 3 years old with Sunset Little League (Oxnard, CA), in their Blastball Division. Two years later I moved over with the girls playing softball at El Rio (ER) Fastpitch in their 6U division, where I spent the next six years.

I loved my years at ER. I made lots of friends, and enjoyed five years of All Stars where I was part of a successful 8U Gold Team. Together we remained undefeated (37-0) throughout the 2018 season ultimately finishing our All Star season as USA Softball’s District Champions, State Champions, and Regional Champions. My last year at ER our 10U Gold All Star team finished the 2019 season as USA Softball’s District Champions and National Champion Runners Up.

Walking away from the league that gave so much to me was hard to do but I knew it was time to search for another challenge. Together with my dad, who’s always been my number supporter and coach, I left and started playing travel ball. Since then, I’ve made new friends across other travel organizations, played against some of the friends I played with at ER, been put into uncomfortable situations that made me grow as a person and as a player, and seen some really cool fields.

Playing Travel Ball is hard, but I love it and can’t imagine doing anything else. I see collegiate players and watch their games with hopes that one day, I’ll be there too. I know it takes hard work but luckily I am being raised with the three D’s – Desire, Dedication, Determination – so I am excited and ready to put in the work it takes to achieve the dreams I have set for myself.

One day it will all be over, but for now, I am enjoying the ride and trying 110% for the game that brings me so much happiness.

Q: What is your favorite softball memory?
A: I have many notable softball memories but my most recent and impactful memory is winning the 2021 PGF National Championship with my current team. The whole experience including having to battle back after landing in the losers bracket before even getting to the championship game is an experience I soak in daily. Of that entire week, there are many moments I wish I could go back and redo but the one moment I take with me is the last pitch of the game. We were winning by 9 runs, 2 outs, and I had 2 strikes on the batter. As I started my windup, tears started to fall down my cheek and by the time I released the ball, I could barely see.

The batter hit the ball right back to me, as I fielded the ball and threw to first, I knew it was over. The excitement and pride my girls and I felt was amazing. That feeling is what takes me into my following game, and keeps me going hard during practice. I want to feel that pride again. I want to experience it all again.

Rachel is a standout student-athlete who works hard on and off the field. She is also a high achiever in the  classroom where she holds a 4.0 GPA . Her highly competitive nature along with work ethic have led her to success both as a pitcher and hitter for her team. She is a quiet leader that leads by example but is learning to be a more vocal leader. Rachel is a spinner in pitching with good velocity and strong command of all her pitches. Her movement, ability to change speed along with consistently hitting her locations makes her a force in the circle.  On the other side of the ball, Rachel has kept her batting average above .550 for the fall season. Rachel brings a high level of confidence and swagger to the field. She is loved by her teammates and coaches.