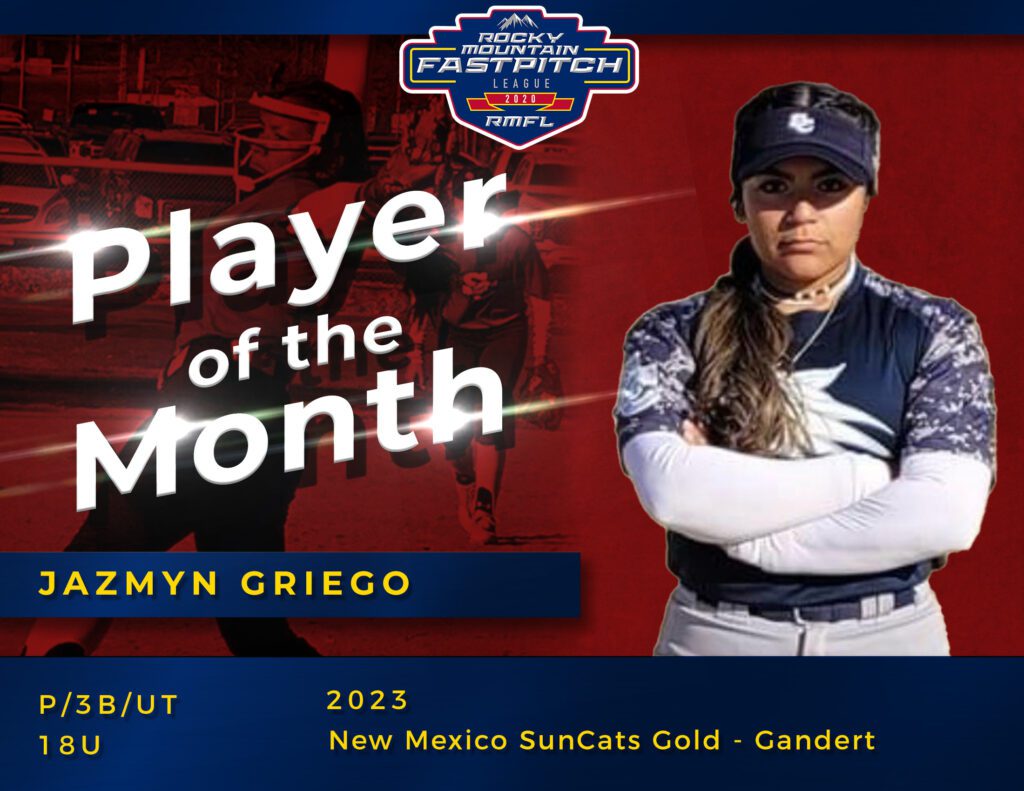 The Rocky Mountain Fastpitch League is excited to announce the RMFL’s November Player of the Month: Jazmyn Griego!

Griego, a 2023 graduate from Albuquerque, NM., competes for New Mexico SunCats 18U Gold- Gandert and is a force on the field both at the plate and in the circle. Across 33 at-bats in November Griego hit .485 with a 1.544 OPS. She contributed 19 RBIs with three doubles, triples, and home runs respectively while swiping nine stolen bases.

COACHES FEEDBACK:
“Dynamic is the perfect word to describe Jazzy…She is a ROCK at the plate, defensively and in the circle. With success comes attention…but her humbleness leads us to victory!! We love our jazzy!!”

MEET JAZMYN:
Q: Can you share a little bit about your softball story?
Griego: I originally was a cheerleader from the age of 5, and up until I was 8. I still played t-ball when I was 5 but never had a thought to play softball. My older sister played softball and one day I just told my mom I don’t want to cheer anymore I want to be like her and play softball. So my mom started me with little league and shortly after that put me on my first club team. At the age of 12 I played for the USSSA All-American team in Florida, and played in Waco TX, for the little league world series regionals. I am a pitcher, shortstop, but I can play anywhere Coach needs me, I’ll even catch if he asked me to, I may not be the best but I’ll always go 110%

Q: What is your favorite softball memory?
Griego: My favorite softball memory would have to be when we won the state championship in 2019 and all I can remember was how fast everyone ran to hug each other, everyone let their emotions show, and it just felt so good, because at that moment we all knew how much we truly loved the sport and how much being a part of a softball family actually meant to us.