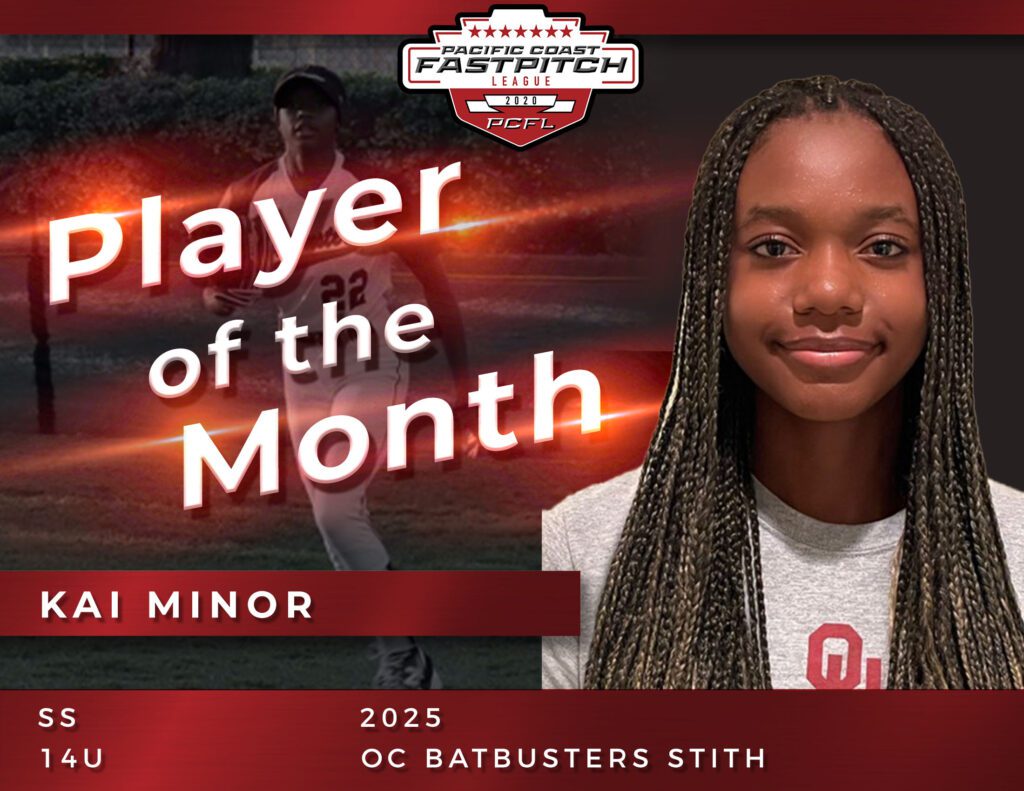 The Pacific Coast Fastpitch League is excited to announce the PCFL’s November Player of the Month: Kia Minor!

Minor, a 2025 graduate from Irvine, CA., competes for the 14U OC Batbusters Stith and continued to dominate at the plate during November. Compiling a .769 batting average across 26 at-bats, Minor also added an on-base percentage of .806 and an OPS of 2.329 while contributing 12 RBIs, five doubles, four triples, two home runs, and nine stolen bases.

COACHES FEEDBACK:
Kai is one of the most talented athletes in 14u and continues to improve every time she steps on the field. She is an extremely tough out for opponents and is an offensive threat for our team as a lead-off hitter. Not only does she have the ability to get on base often, she can run very well and is often able to create some chaos on the bases. Her speed also makes her an asset on the grass for us in centerfield. I look forward to seeing the impact she continues to make on our sport.

MEET KIA:
Q: Can you share a little bit about your softball story?
Minor: I started playing softball when I was 6 years old for a rec league when I lived in Las Vegas. I fell in love with the game immediately and started getting hitting and pitching lessons. I joined a 10u travel team when I just turned 8. I have always played with girls several years older than me so I could be challenged on the field. My parents and I were traveling from Vegas to Southern California every weekend for a couple of years to help with my development, and eventually, we relocated to Irvine in 2019.

I am a 2x USA Softball All-American, scored a 90.66 index for OnDeck, and ranked 17th by Extra Innings.

Softball is my passion, and I love all the coaches and teammates that have supported me throughout the years. My goal is to help a team win multiple NCAA championships when I get to the next level and also to become an Olympian.

Q: What is your favorite softball memory?
Minor: This past summer during bracket play in the Colorado IDT, my Batbusters team was tied with the Beverly Bandits in the last inning. I hit a two-run home run to help my team win, and we ultimately went on to win the championship for IDT. Later that summer, our team placed 2nd in the TCS Nationals and achieved a top ten finish at the Alliance Championship. It was an amazing championship-level summer and I will always remember how close I got with my teammates and coaches. Truly unforgettable and life-changing for me.