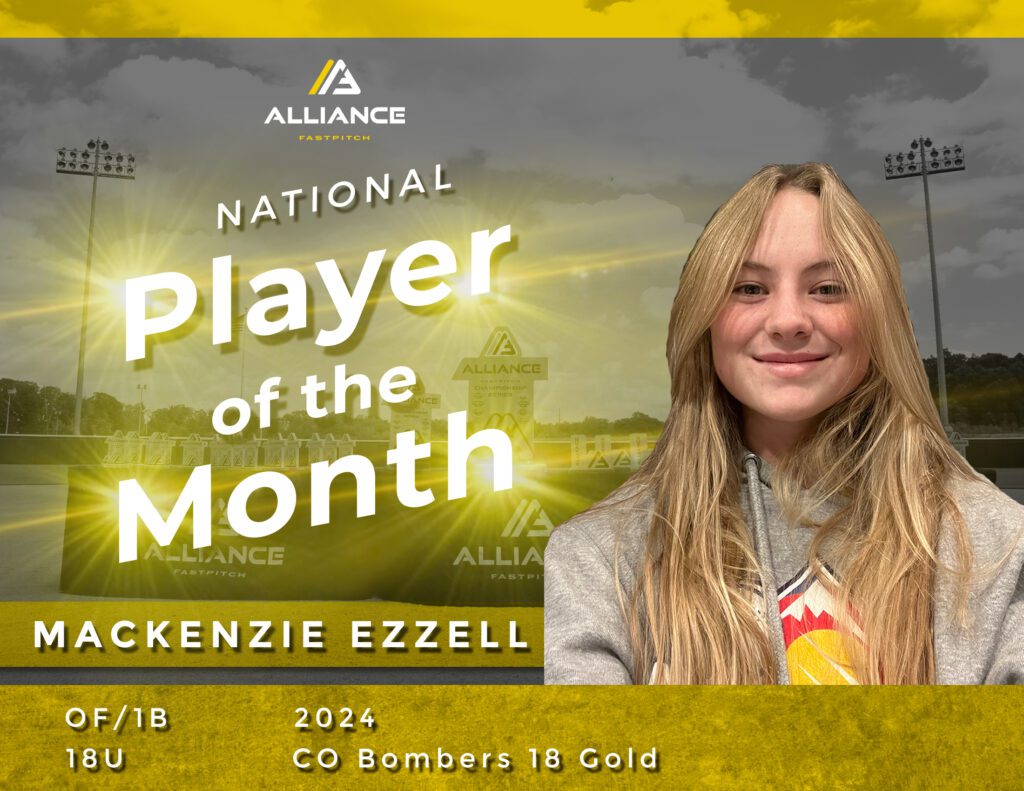 As part of the Alliance Fastpitch Player Recognition Program, we are excited to honor Rocky Mountain Fastpitch League (RMFL) outfielder/1B, Mackenzie Ezzell of CO Bombers 18 Gold as the National Player of the Month for her performance in November.

Tell us a bit about your softball story! How’d you get started in the sport?

I’ve been playing softball since I was 7, and I started comp ball at 11. Now I’m 16 and I love the game as much as I did then. Softball just stuck, unlike other sports, and I wouldn’t trade it for anything.

What has been your favorite softball memory?

Who is your favorite softball player?

What do you like to do outside of softball?

I enjoy exploring the mountains and taking photos of the landscape, hanging out with friends, and baking

What are some of your current goals – both on and off the field? (Softball, school, other athletics, related, etc. all welcomed!)

My current goals include:

Improve finding the fence in the outfield

Take some pretty photos in NY

Tell us a bit about your athlete? As a player, person, etc.

Kenzie’s superpower is in her approach to the game. The moment never gets too big for her. Whether it’s her pure joy for playing softball or simply the joy she has for living her life, it’s noticeable, it’s infectious and it’s invaluable to her team.

Her demeanor allows her to sidestep all of the pressure and stress that most players at her age and skill level burden themselves with. We would love to take credit for teaching this to her, but the fact is she’s had it from day one, and it’s made her one of the most coachable players I’ve ever coached. That being said, don’t ever tell Kenzie she can’t do something. She has the ability to flip the switch from joyfully playing the game to the fiercest competitor on the field. She does it in the moment, without losing control of her game. She is one of the rare players that can balance competitive fierceness with a sheer love of the game, a combination that is as unusual as it is fantastic!!

Do you have a favorite memory or moment of this athlete?

We’ve really struggled with this question…how to pin down one moment for a player that brings joy, effort and attitude EVERY TIME she steps on the dirt?  I will go back to the first moment when I realized how special she was. It was 3 or 4 years ago at one of our first hitting sessions with her. I was simply trying to see where her swing was at and what she knew about it. As we worked through the mechanics, I started to make adjustments, she would smile and say ok coach….and just do it. She made multiple “on the fly changes” to her swing without questions, without struggling to feel it and with the ability to repeat it over and over. I was absolutely astonished and asked her how she did that? She simply smiled broadly and said, “I don’t know, I just did it”. She’s embraced every opportunity to improve with the same approach for three plus seasons. Every moment with Kenzie is my favorite moment because she never stops surprising me.

Kenzie is one of those special players coaches coach for. Her skill set is the result of all the intangibles that are tough to teach but you recognize as the real deal when you see them. The only one who doesn’t know how good she is, is her.