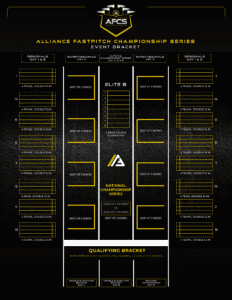 March 2021 — The Alliance Fastpitch was created to put the player first and to put together a framework that best prepares our athletes on and off the field. A key part of the athlete experience is post season play. The Alliance Fastpitch Championship Series (AFCS), our culminating post season event for League play, will feature a college softball post season format designed to prepare athletes for the next level. This format at the AFCS includes a Regional style bracket to start, a Super Regional Series, an Elite 8 format similar to the Women’s College World Series, and a best two-out-of-three National Championship Series. Teams who do not win their Regional will be placed in a double elimination Qualifying Bracket. Though these teams cannot advance to the National Championship, the Qualifying Bracket winner will receive points towards the next season League play and Alliance Cup Series – similar to a European soccer model that continues to push competition.

“Many of these young athletes aspire to play in college where they will be in situations during Conference Play and Post Season where they have to beat the same team two or three times on a given day or weekend,” said Alliance Fastpitch Executive Director Jami Lobpries. “I’ve gone through it in my college career where we lost early in Regionals and had to battle back to get to Supers or when we had to beat the same team twice in Super Regionals to advance to the WCWS. We feel this format will help prepare young athletes for those moments, will be a learning tool for coaches and teams on how to strategize and build game plans learning how to beat pitchers twice, and will help to truly define the National Champion at each age. This format will be a grind! The last team standing will have truly earned the right to call themselves The National Champion of the Alliance Fastpitch.”

Another key component, similar to college softball, will be the overall seeding going into the AFCS. Utilizing League Standings, the Alliance Rating System and the Alliance Power Points, national seeds will be determined by a team’s season long body of work. The Alliance Fastpitch is assembling an actual Seeding Committee to review the top 64 seeds based on their points and season’s work. This has yet to be done at the youth National Championship level and we believe it brings the objectivity into seedings and rewards teams for their performance on the field.